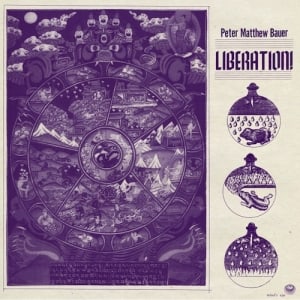 [xrr rating=3.5/5]I’ve harbored a secret fantasy since the Walkmen went on hiatus. As the former members announced solo albums, I had a vision in my head: after the release of each (hopefully) stellar album, the Walkmen would announce a reunion tour, featuring songs from each member’s solo discography, and, like an indie-rock Voltron, it would combine into something stunning. The Walkmen’s former frontman Hamilton Leithauser had a solid solo debut with Black Hours, and so did Walkmen organist Walter Martin, setting a good pace for the rest of the solo releases. Peter Matthew Bauer’s Liberation! has the collective batting three for three.

At first listen, Liberation! sounds a hell of a lot like a Walkmen album. Bauer’s croon even sounds like a less hoarse version of Leithauser’s delivery. But while Black Hours focused on infusing piano ballads and Broadway musicals into the Walkmen sound, Bauer has a taste for more international flavors. That much is obvious from the song titles (“Latin American Ficciones,” “Irish Wake in Varanasi”). Liberation! isn’t the most cohesive album out there, but Bauer treats it as a set of short vignettes. The locals he describes read like the chapters of a travel novel, with just a tinge of fiction and fantasy clinging to the descriptions. Liberation! is like a set of postcards sent from a world tour.

Even when compared to some of the Walkmen’s softest works, like 2012’s [Heaven], Liberation! seems warm and honey-soaked. The swaggering title track bounds forward like an excitable mastiff, graceful and grand, but in an energized way. Much of this album has this sort of reserved joy to it. “It’s a full moon dream” as Bauer tells it on the gently romantic opening track, “I Was Born in an Ashram.” He takes great care in enveloping the listener in lightly psychedelic tones, like Bauer is cooing these tales between sips of tea or puffs of hookah.

There’s plenty of globetrotting on Liberation!, but the sound is often rooted in ‘70s American rock. “Latin American Ficciones” puts Bauer’s highest notes over golden-toned guitar and boom-clap drums. “Fortune Tellers” has a rambling folk-rock influence and “Shiva the Destroyer,” despite the title, swings at a comfortable tempo that Mac DeMarco would find appealing. There are nice deviations to the formula with songs like “Scientology Airplane Conversations,” which feels like a lost Neutral Milk Hotel cut. Finale “You Are the Chapel” feels like a split between Springsteen and Aaron Copland with Bauer doing his best Mick Jagger impression. Now, for Walkmen fans asking for more of the old stuff, there’s “Irish Wake in Varanasi” cutting in with a furious guitar that sounds distractingly similar to Heaven highlight “Nightingales,” and the song holds a more conventional melody line that weaves its way around the chorus.

The two best tracks Bauer offers are the two most meditative. “Istanbul Field Recording” will feel familiar to any fans of ambient genius the Caretaker’s An Empty Bliss Beyond this World with its faded and warped piano waltzing over floating background nose. It’s gorgeous and scarily easy to get lost in. “Philadelphia Raga” is Bauer’s finest piece, hearkening back to American Primitivism masters like Robbie Basho by combining the traditionally Indian music form with a sweet American pop-rock second half. The first part is mesmerizing with guitar gently gliding here and there before Bauer and his band roll in with an instantly hummable verse and a road trip-worthy rhythm. This is Liberation! at its grandest; an impressive combination of American musical sensibilities with a sweet tooth for motifs from across the globe. When Bauer sings “records in the house of soul,” he’s not referring to a Motown soul, he’s referring to ancient temples and other breathtaking sights.