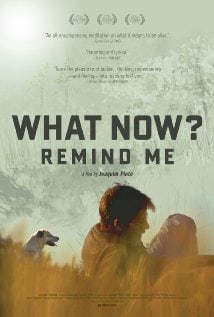 [xrr rating=4.5/5]Joaquim Pinto’s What Now? Remind Me is the sort of film that not only reinvigorates one’s faith in nonfiction but in filmmaking in general. Were it simply a document of its maker’s struggles with HIV and Hepatitis C, exacerbated by the toll that experimental drug programs take on his already weakened body, the film would be undeniably powerful. Yet it might only be so in that way that so many documentaries are, playing upon an inherently sympathetic subject to compel its audience over any great skill in direction or assembly. What Pinto accomplishes is to actually visualize his subject, not just his own plight, but the personal ruminations and political realities that give his illness context.

Pinto goes about this by employing all manner of small effects. He uses stop-motion to animate a pet’s toy, paints abstracts onto frames in the manner of Brakhage, arranges photographs into montages of fleeting memory, and more. Most notably, Pinto uses numerous techniques redolent of Jean-Luc Godard, particularly those that dot the French auteur’s Histoire(s) du Cinéma. Superimpositions reflect Pinto’s sense of dissociation from his thoughts and his body, particularly when some of the more powerful untested drugs take hold, sending contrapuntal ghosts flying in opposition to any synchronization Pinto’s brain intends to give to various limbs. The director also displays a morbid wit with such in-camera tricks, mentioning his doctors’ instructions to stay positive by flashing an x-ray “smile” over a shot of him driving to upbeat music, the skeletal rictus indicative of the sense of doom underneath his outward calm.

The disciplined but vivacious use of formal devices sets up the viewer for unpredictability, and it also allows Pinto to more easily spiral away from the immediate concerns of his health to larger issues. Forced to jet around the world for treatment for his incurable illnesses, Pinto reflects on the global expansionism that helped unleash such viruses in the first place, as well as the interconnectivity that allows him to watch Rachel Maddow in the United States report on a homophobic murder in Africa by viewing it on YouTube in Europe. This is no screed but an attempt to reconcile the cumulative effects of colonial, technological and capitalistic growth, capable of measuring its benefits and drawbacks. Pinto only displays anger when he gets most personal, tying shots of destruction both environmental (wildfires) and economic (news footage of various austerity protests) to his own sense of collapse.

For the most part, however, the film allows Pinto to try and sketch a philosophy and time and memory. Having led a political life, Pinto nonetheless processes events through intimate recollection. For example, he recalls living through Lisbon’s Carnation Revolution primarily by noting the sort of films he could subsequently see thanks to eased censorship. Then again, the mixture of titillation like Emmanuelle and Deep Throat with more incendiary pictures like Contempt or the work of Eisenstein says more than enough about the absurdity of dictatorially enforced morality. Elsewhere, Pinto documents his history with HIV by mixing his own life with accounts of his many dead friends, whose absence weighs on his frail frame.

For all the aesthetic tricks and the complexities of philosophy and history broached during the film’s three hours, its most arresting moments may be those that simply regard Pinto at his lowest, usually prostrate on a bed struggling with the concentrated effort it takes to breathe while under the influence of the most powerful of experimental drugs. This might have been the whole raison d’être of another documentary on this subject, but Pinto shows himself so unvarnished as punctuation for his intellectual pursuits and memorial thoughts. Above all, What Now? Remind Me is an attempt to make some record of the present for a man who may have no future, and the incorporation of past memories and historical context is as much a part of that as Pinto dealing with drops in energy, or playing with dogs or even, in one elegantly lit, loving scene, making love with his husband. Most documentaries offer enough stimulation for one good, involved viewing, but Pinto’s opus, with its dense visual allusions, intellectual ambition and bracing honesty, is a work of nonfiction that begs to be seen often, no matter how hard it can be to watch at times.