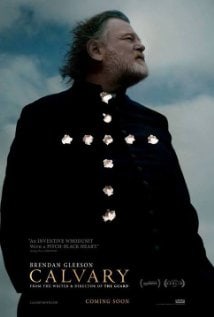 [xrr rating=2.75/5]Brendan Gleeson is one of our most underrated entertainers, a character actor who can wring amazing performances out of the frequently oafish supporting roles he often garners, most memorably as a hit man with a conscience in In Bruges. Director John Michael McDonagh gave Gleeson a leading role in his 2011 comedy The Guard and once again gives him top billing in Calvary, a bleak film about an Irish priest who will likely die for the sins of the people in his flock.

As with his best roles, Gleeson plays his Father James Lavelle as sweet man with a tough exterior, one who feels like an anachronism in his parish. In the film’s opening sequence, Father Lavelle hears confession from a man who had been sexually assaulted by a priest as a child. The man claims that to exact his revenge, in one week he will kill Father Lavelle, even though he is an innocent priest. McDonagh keeps the man’s identity secret from us, but Lavelle knows exactly who is threatening him. Of course, Lavelle does not go to the police or disclose the name of his would-be murderer because the confessional is sacrosanct.

Calvary is part allegory, part murder mystery. We follow Father Lavelle as he makes his rounds amongst his parishioners, all of whom could potentially be the suspect as they each harbor deep resentment for the Church. Looming in his cassock, Father Lavelle feels like a man out of time, an unwelcome guest at each destination. The people in the community are all living in sin. There is an atheist doctor, a love triangle and a man consumed by wealth, among others. Not everyone takes exception to Father Lavelle. An old writer (M. Emmet Walsh) has no interest in the priest’s counsel, but treats each visit like that of an old friend. Father Lavelle’s daughter, born before he took to the cloth, comes to visit after a tragedy in Dublin.

Gleeson’s performance aside, Calvary suffers from a script that borders on histrionic, one where the comedy does not mix well with the dramatic. The film is essentially a retelling of Christ’s final days, an allegory that really isn’t that deep or inventive. We’ve seen this before, time and time again. Like Jesus, Father Lavelle is conflicted: does he face his murderer and die for the sins of his parish or does he turn away and leave the village? Don’t be fooled, this is a very grim film, despite the studio’s best efforts to bill it as a dark comedy.

Even more beguiling than Gleeson’s performance is Larry Smith’s cinematography. Calvary features beautiful shots of deserted beaches and ominous mountains, a God-forsaken land of loneliness and sadness. When the end finally arrives, Smith’s camera gives the final confrontation one of quiet and devastating gravitas. It’s too bad that McDonagh’s script is too cheekily self-possessed to give such dignity to any other character besides Father Lavelle.