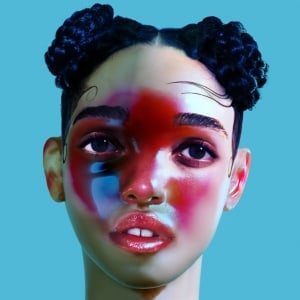 [xrr rating=3.5/5]If you’re familiar with robotics or game design, you might have come across a term called the “uncanny valley.” It’s a fascinating piece of psychology that revolves around robots or 3-D animations that look human, but not quite. For most people these near human representations are unnerving. Freud described uncanny as “the opposite of what is familiar,” in this case a twist on what is familiar, something that is not quite right. It’s a sentiment well used in film, especially physiological thrillers like Vertigo or Inception, presenting a fairly normal situation, only to have layers of undescribed dread lurking just beneath the surface. FKA Twigs excels at uncanny music. These songs are undoubtedly sexy and sexual, but some shuddering darkness seems attached to each track.

She’s not the first to do this; Radiohead and St. Vincent come to mind. Radiohead’s “Jigsaw Falling into Place” contrasted a scene of bar-room flirtation will a full on nervous breakdown and St. Vincent cooed “Marry me John, I’ll be so good to you!/ You won’t realize I’m gone…” in “Marry Me.” LP1 is reminiscent of both the Radiohead and St. Vincent techniques to create cognitive dissonance. Opening track “Preface” has a near hip-hop beat, with a low distorted voice rapping over high hats, but Twigs’ voice hovers above chillingly, a ghostly choir of her vocals twitching and murmuring. At times the music takes on a disturbing edge that match Twigs’ penchant for creepiness. The beat on “Numbers” jerks around like it’s being put through an exorcism over a passionate performance by Twigs (“Was I just a number to you?”). With Twigs’ delivery, you could almost see the chorus coming on radio, but then the verse background reminds you you’re in a strange land.

LP1 is one of a few pop albums in recent memory that demands headphones. One can imagine a truly daunting amount of layers and tracks on Pro Tools needed for some of the more textured tracks. There seem to be dozens of Twigs singing with each other on most of these tracks for one thing, darting from breathy murmurs, childish lines all the way to an impressive lower range. LP1 feels like a very full album, there’s little dead space; on songs like “Give Up,” wubbier flavors are mixed with sparkling synths that ascend to the atmosphere. The clapping percussion of “Closer” goes hard, even with Twigs focusing her voice on a chamber-choir delivery. “Pendulum” is the thickest song here, synths dripping from the sides and a stuttering drum pattern vibrating from earphone to earphone over the five minute run time.

The only problem the album really has is showing its hand too early. After the short intro, (appropriately named “Preface”), Twigs presents her two finest pieces yet: “Lights On” and “Two Weeks.” Both of these have Twigs diving into the most explicit sexual moments on LP1. “Lights On” is disturbingly gorgeous, with Twigs’ enchanting near whisper of “When I trust you we can do it with the lights on.” That chorus brings up more questions than answers, and Twigs ain’t revealing nothing. Instead she builds the tension with an undulating synth line, growing bass and even alarms going off. The song never reaches a proper finish, cutting off as the song doesn’t quite end its thrilling climax, though that might be the point. “Two Weeks” is even less subtle and nearly challenges Frank Ocean’s “Pyramids” as the most seductive song made this decade. It’s one of Twigs’ strongest performances, full of rushes of airy “aaah!”s, with just as many languid alto lines. “My thighs are apart for when you’re ready to breathe in” she coos just before releases a moan. “Two Weeks” is a sudden burst of maximalist pop ideals, the most straightforward, and least creepy, song on LP1. Twigs is perfectly comfortable in her own profoundly weird Art-R&B world, but she can do a damn fine pop song. Uncanny.