September 27, 2020
Home Books The Mansion of Happiness: by Jill Lepore 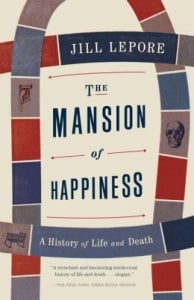 [xrr rating=3.75/5]In her new collection of essays, The Mansion of Happiness, Jill Lepore examines how Americans have thought about life and death, from before the cradle to beyond the grave. Connecting these ideas is the history of a 19th century board game of the same title, one that would eventually morph into the Game of Life. After it was adapted by Milton Bradley, the game changed in its teaching, rewarding the industrious over the pious. Rather than skirt temptation, the person who had accumulated the most stuff by the game’s end is the one who wins.

Since the Game of Life takes us from birth to death (or retirement in later editions), it serves as the perfect connective tissue for Lepore, whose essays concern questions such as, “Where do I come from?” “Why am I here?” and “What happens after I die?” In her introduction, Lepore states that no one, no matter what religion, can answer these questions, nor will they ever be able to be answered. That doesn’t mean that people haven’t tried to answer them and won’t continue to try in the future.

Though loose, Lepore sequences her essays in concert with the phases of life, progressing from issues before birth to childhood to adulthood to death and beyond. Each essay is a history lesson, beginning with one about the controversy around a 1965 issue of Life Magazine printing photos of fetuses and purporting to capture “The Drama of Life Before Birth.” Although readers were led to believe the photos had been taken in utero, the fetuses were in fact already dead, harvested from miscarriages and abortions. Lepore states that these portraits of life
“were, in fact, portraits of death.” And so sets up the rest of the essays, intellectually nimble bait-and-switches where Lepore brings in everyone from Stanley Kubrick to E.B. White to Sigmund Freud to reveal a country with a pretty vile history.

For those who think we’ve moved on from the “dark ages” of early American history need to take the time to read The Mansion of Happiness. A hoary host of characters support whacked out notions ranging from eugenics to freezing the dead until science is able to restore life. One of the best essays comes early when Lepore examines the history of the breast pump. In great detail, Lepore sets out to prove that through technology, women have become their own wet nurses as they are shuttled quickly back to the workplace soon after giving birth. While companies are becoming compliant by giving women the time and space to pump, Lepore incredulously remarks on one such room at the University of Minnesota that is set aside from pumping, yet there is a sign that tells these women, “This room is not intended for mothers who need a space to nurse their babies.”

Lepore maintains a strong level of quality throughout this brisk read, and her message is clear. Nothing will ever explain away the mystery of where we are before we arrive here and we sure as hell don’t know where we go when we die. Though man considers himself ingenious and has crafted technological marvels to make life easier, we all pass through the same stages, emerging from some mysterious darkness, one we all eventually slip off into. The Mansion of Happiness solves none of these mysteries, but it certainly makes one think, and that’s the noblest thing a book can do.