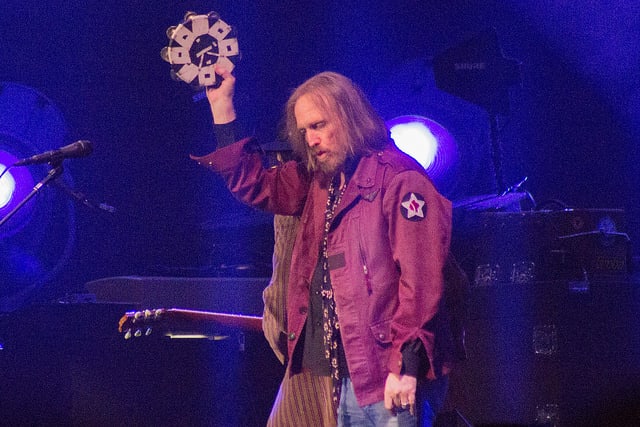 Tom Petty has always seemed like a reluctant rock star. Never the jubilant ham like Bruce Springsteen or the bizarro building instruments in his barn like Tom Waits, Petty falls more in line with Bob Dylan, yet more consistent in his muse. Dominating the ‘80s and a good portion of the ‘90s with hit songs, Petty’s star diminished greatly when the internet and advertisements, rather than radio and MTV, became the fecund hunting ground for top songs. Petty may have spent the oughts releasing a string of uninspired records, but if you try to rattle off the killer tunes the man put out before that, you won’t have enough fingers to keep track.

Petty always appears like he’s in mid-shrug, disaffected in a passionate way, and his live show at Portland’s Moda Center demonstrated exactly why the man still sells out arenas. Promoting his new album Hypnotic Eye, his first number one record to boot, Petty and his Heartbreakers turned in a 20 song setlist peppered with hits, album tracks and excellent covers. Stars like Neil Young may often willfully withhold the hits when touring a new album, but Petty crafted a setlist that appealed to both the hardcore fan and those who only listen to his Greatest Hits collection.

Clad in a patch-covered Army surplus jacket, his shaggy mane still reaching his shoulders, Petty began the show with a cover of the Byrds’ “So You Want to be a Rock ‘n’ Roll Star,” a fast-paced provocation and a reminder to himself that the game isn’t something to take lightly. Next came “Mary Jane’s Last Dance,” one of his last hits, sending the crowd into paroxysms of cheers. Petty was playful and smiling, making polite and sometimes funny banter, though it didn’t appear to come easy. A cover of Big Joe Williams’ “Baby, Please Don’t Go” led to a moment of discussion about a failed marriage, but then Petty quickly retreated into new song “American Dream Plan B.”

The middle portion of the set was a veritable Greatest Hits. “Into the Great Wide Open” has aged well and felt inspired, crowd-pleasers “I Won’t Back Down” and “Free Fallin’” had everyone standing and singing along. But Petty isn’t content to be simply a nostalgia act, and he performed deep cuts including a stinging version of “Tweeter and the Monkey Man” from his Traveling Wilburys days, and played for the die-hards in an acoustic section that featured “Rebels,” “Dogs on the Run” and “Yer So Bad.”

Despite the big arena feel of the Moda Center, Petty and the Heartbreakers felt like a real band at work, a testament to the length of time he has played with folks such as Mike Campbell and Benmont Tench. After screwing up the first verse of “Learning to Fly,” Petty cut the number short and then simply said, “Shit happens,” before starting it again.

Aside from the new songs, Petty largely ignored his career post-1994. He played “I Should Have Known It” from 2010’s Mojo, but most of the set concentrated on material from 1991 and before. After closing down the first set with “Refugee” and “Runnin’ Down a Dream,” the band returned for a two song encore of “You Wreck Me” and “American Girl.” Since this is the 20th anniversary of Wildflowers, I would have liked to see more of that album worked into the set. With such a deep catalog, there are plenty of favorites he didn’t play, including “Don’t Come Around Here No More,” “The Waiting,” “Here Comes My Girl” and “You Got Lucky.” But you know? All those unplayed songs make me want to see Tom Petty and the Heartbreakers again. It’s not a bad feeling to have after a show.