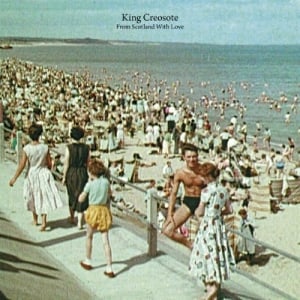 [xrr rating=4.0/5]Scottish folk artist Kenny Anderson, who goes by the stage name King Creosote, has released more than 40 albums since the late 1990s. With this kind of staggering prolific output, it is amazing that the singer-songwriter still has something to say. It is a testament to Anderson’s boundless creativity that one of his latest releases, Diamond Mine, the 2011 collaboration with electronic musician Jon Hopkins, was considered by many critics and fans alike to be his best. The musical ode to life in a coastal Scottish village, which featured field recordings, subtle electronic grooves and Anderson’s tender, expressive voice, was nominated for a Mercury Prize and received much well-deserved international recognition.

From Scotland with Love is Anderson’s latest release and, like Diamond Mine, it is anything but conventional. This newest King Creosote album, a collaboration with filmmaker Virginia Heath, was commissioned by the BBC in conjunction with the July 2014 Glasgow Commonwealth Games as a history of Scotland’s political and social triumphs and tribulations. Anderson’s music serves as a soundtrack to the documentary film, which uses only archival footage (no interviews or voice-over narrations) to tell its story. While one could imagine that the tunes pack the biggest emotional punch when juxtaposed with Heath’s carefully curated images, the record From Scotland with Love stands on its own as a stunningly beautiful artistic statement, one that rises to the top of Anderson’s diverse, extensive discography.

Given From Scotland with Love’s subject matter, it would be understandable to approach the album with a certain degree of trepidation. The danger of the record coming off as a dry history lesson is palpable. Fortunately, Anderson rightly understands that history is not just about obscure names and dates but is made up of real people and their everyday lives. From Scotland with Love succeeds because of its highly personal nature. We hear more about Scottish folks and their working-class jobs, romantic entanglements and raucous nights in local pubs than we do the textbook wars and political conflicts that supposedly make up “history.”

We get, for instance the lovely “Cargill,” a folky duet about fishermen in a small Scottish village (“My heartstrings are entangled in your net,” Anderson cleverly sings). On “Bluebell, Cockleshell, 123,” a children’s chorus invokes the horrors of war and the reality of death à la classic dark nursery rhymes like “Ring around the Rosie.” After a spirited chorus sung by the kids, Anderson joins in with lines like “Bury me in the old churchyard/ Beside my only brother.”

Musically, Anderson makes a similar move as Rosanne Cash did earlier this year on The River & the Thread, her tribute to the mythology and music of the American South. Rather than simply replicating the musical traditions of their respective homelands, Cash and Anderson both place their geographical areas under a modern microscope, combining traditional features with elements of rock and contemporary folk. Anderson makes use of a gentle, sensitively orchestrated string section throughout the album, used to stunning effect on the ballad “Miserable Strangers.” “For One Night Only,” a party anthem with a dose of melancholia, has a strong indie-rock vibe, sounding like it could be recorded by Death Cab for Cutie. Despite these contemporary touches, a few of the tunes are unabashedly traditional, such as “Largs,” whose om-pah-pah rhythms and dance hall clarinet might prove a bit antiquated for some modern sensibilities.

Despite its stated goal of delving into history, From Scotland with Love is just as much about the present as about the past. With Scotland voting on its independence from England later this year, Anderson has wisely tapped into the question of what, exactly, it means to be Scottish. While a sort of Scottish identity comes through on the record, there is also a strong dosage of universal humanity. When the chorus sings the lyric “You’ve got to rise above the gutter you are inside” on “Pauper’s Dough,” the line could be applied to virtually any nation at any time in history. After releasing more than 40 albums, King Creosote is still showing us something unique about ourselves. What more could any artist hope to accomplish?