David Foster Wallace, in his essay “David Lynch Keeps His Head,” refers to the term “Lynchian” as “a particular kind of irony where the very macabre and the very mundane combine in such a way as to reveal the former’s perpetual containment within the latter.” But even if you can’t define it, it isn’t too much of a fallacy to resort, as Wallace does, to “you know it when you see it.” That is, unless it’s right in front of you and you don’t see it at all.

The Straight Story has a reputation for being Lynch’s easiest film, the sweet, sentimental one that you can watch with your parents or show your kids, the one with a clear, definable and uncomplicated narrative, the one that is everything the title suggests. In it, Alvin Straight (Richard Farnsworth), a 70-something World War II veteran journeys from Iowa to Wisconsin by lawnmower against the better judgment of everyone he knows to visit his estranged brother who recently had a stroke. Alvin camps out in the cornfields, trades war stories with veterans, bestows some advice on a young runaway and witnesses a bizarre accident involving a car and a deer, among other things, before reaching his brother. The power of the story comes from watching a former alcoholic slowly and convincingly put aside the past and come to embrace family. He lets details about himself and his life trickle out, and small gestures and interactions reveal a great deal about him. Throw in a top-notch performance from Farnsworth and you have what could be Lynch’s second tearjerker, after 1980’s equally-great The Elephant Man.

But if a Lynchian film is one that scrapes away a halcyon surface to interrogate a dark underbelly, The Straight Story might be the director’s most Lynchian film, as it continues to push forward one of the director’s major motifs to increasingly complex limits. In both Blue Velvet and “Twin Peaks,” Kyle MacLachlan plays a character who has to dig beneath the surface of a quaint small-town to uncover the seedy reality underneath. Lost Highway takes that motif to the next level, as a narrative about a man harassed and troubled by a gangster reveals itself to actually be his own construction; the underlying truth (quite literally underlying, given the film’s Mobius Strip structure) is that he killed his wife. In The Straight Story, the surfaces—the film itself, from its genuine emotions to its Disney-produced, G-rated para-text to its mundaneness—need to be scraped away by the viewer to uncover the macabre.

Alvin’s journey is broken up by a series of encounters with people he meets on the road. In the first encounter, he tells a runaway that his daughter Rose (Sissy Spacek) had her children taken away from her when a fire broke out when “somebody else was watching them.” Rose had nothing to do with the fire, but being “what some might call a little bit slow,” the state took her children away. What The Straight Story is really about is Alvin Straight coming to terms with the fact that he was that “somebody else” who was watching Rose’s children, and thereby responsible for estranging himself from his family—that’s pretty macabre. 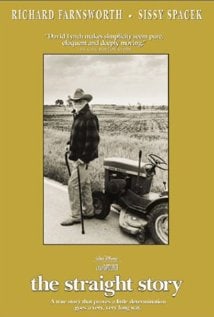 This is not stated very clearly in dialogue at any point in the film, but Lynch is a master of visual storytelling, and it is of the utmost significance that the centerpiece of the film and the most distinctive scene and the sole generator of suspense and fear that so dominate Lynch’s oeuvre, a near-accident when Alvin can’t brake on a hill leading down to a burning building, reminds us of that story. Alvin’s speedy descent shifts to focused point-of-view shots as he watches the road and then takes a turn into less reliable and shakier looks at the burning building, which continues to pop-up in the frame, as if Alvin is more concerned with that building than the crash that could end his journey—if not his life—prematurely. After Alvin reaches the bottom of the hill, a few onlookers ask for his story and offer assistance, but the burning house remains suspiciously conspicuous in the frame. This detail is emphasized too heavily to be dismissed as incidental, and it is through this lens that The Straight Story reveals to be every bit as “Lynchian” as Blue Velvet or Lost Highway. The mundane conversation with the townspeople hosts the macabre reminder of a house fire and a drunken patriarch within the very same shot.

The initial encounter with the runaway, then, is not the detached vignette it seems to be—nor are any of the other encounters. Alvin tells her a story about how his children were able to break one stick easily, but after he bundled together a number of sticks and asked them to try breaking the bundle, they could not. “That bundle? That’s a family,” he says. When he wakes up the next day, the runaway is gone, but she has left behind a bundle of sticks. That’s reassuring, at least until you realize that Alvin is responsible for the loss of his grandchildren, that only seven of his own survived—survived what? We never learn—and that of those seven, only Rose seems to be part of his life. There is probably some analogy or symbol for his family, but it isn’t a bundle of unbreakable sticks tied together.

For the better representation of the Straight family, we have to wait for a later encounter, a strange scene with a woman who accidentally strikes a deer. It’s the fourteenth deer she has hit in seven weeks. She must be cursed to have deer regularly jump in front of her car. This woman is cursed as surely as Alvin’s family is a neat bundle of sticks, or about as much as that burning house is insignificant, or as certainly as this is Lynch’s light, happy, sentimental film—all of that to say, “not at all.” Nobody hits at least one deer a week, not unless they are careless, and if she hit this deer because she decided to speed ahead and pass at the very edge of a no-passing zone, as we see her do, how are we supposed to believe the previous accidents have been out of her control? It is thirteen, after all. And seven weeks? Those seem like bizarre, probably-not coincidental callbacks to Alvin, who is estranged from 13 children, although only seven (including Rose) survive. Just as this woman must have been pretty careless to hit 13 dear in seven weeks, Alvin must have been pretty careless to have lost seven of his children. “And I love deer!” she exclaims. Alvin probably loves/loved his children, too.

Indeed, when the encounter ends and the film cuts—rather humorously, it should be noted—to Alvin eating venison, there are a number of eerie looking deer statues watching him with an almost judgmental expression, made all the more unsettling thanks to Angelo Badalamenti’s strings. Alvin looks back at the deer, a symbolic stand-in for his children, as if haunted by his own past actions. Afterward, he mounts the deer’s antlers to his rig and hits the road, now almost literally carrying with him a reminder of what he did to his children and grandchildren, and we continue to see those antlers throughout the film, most clearly in the scene with the burning house. This is yet another detail too important and noticeable to dismiss merely as a nice touch, something banal on the surface but teeming with dark secrets.

There is at least one more major hint that Alvin is the “somebody else” in his anecdote and an all-around destructive patriarch to the family Straight. When he exchanges war stories with another man, he recounts the time that he, serving as a sniper, accidentally killed a friendly scout. “He was just a little fella,” Alvin tearfully recalls. “Little fella” is too similar to, say, a nickname for a grandchild, to be coincidental. In fact, that first tragic mistake was likely the impetus to his alcoholism that led to his hurting of another “little fella,” Rose’s child who “was burned real bad.”

Between the encounters with the runaway and the woman who hits the deer, Alvin spends some time with a group of bicyclists. “What’s the worst part about being old, Alvin?” one of them asks. He replies that “the worst part about being old is remembering when you were young.” We have all probably heard a variation of that nostalgic, sentimental, and yes, mundane line before. Given what we now know about Alvin Straight though, aren’t that line, the character and this film more than a little spooky?