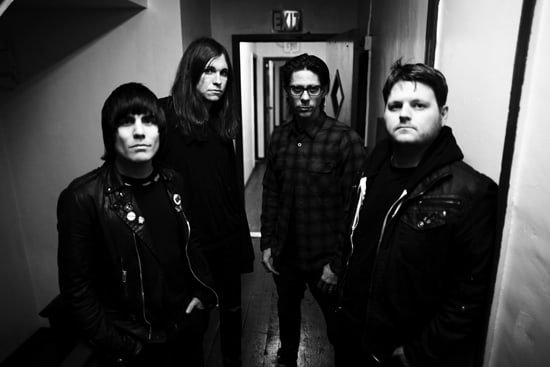 I’ve had a few heated conversations with fellow punk fans who assert that Against Me! sold out the moment their 2007 record New Wave hit the shelves. The new package was too sleek, too poppy to have the same soul as releases like Against Me! Is Reinventing Axl Rose, they claimed. The conversation surrounding Against Me! shifted once frontwoman Laura Jane Grace came out as transgender, but I could still hear the murmurings that Against Me! just wasn’t the same. If you think that, you’re wrong, and Against Me!’s live show will be all the proof you need that they never sold out.

Against Me! opened with “FuckMyLife666,” setting the tone for the set, as the majority of the songs were culled from this year’s Transgender Dysphoria Blues. Good thing too, as songs like “True Trans Soul Rebel” and “Black Me Out” are meant to be performed live. There’s only so much in-studio shouts can do, and they pale in comparison to a room of sweaty punks screaming the lyrics. They kept the old fans happy too, with cuts like “Pints of Guinness Make You Strong” and “Cliché Guevara” from their first two albums. It’s been over a decade since those early albums and Grace’s voice has changed. She doesn’t quite scream like she used to. She basically let the crowd do the brunt of the work on “Thrash Unreal” (to awesome effect) and, surprisingly, it was guitarist James Bowman who covered most of the band’s most iconic screams. But Grace made up for it with a new focused intensity that evaded that era of work. Even with the vocal change, Grace is a firebrand of a frontwoman. She pulled members of the audience on stage for sing-alongs and urged on the truly absurd amount of stage diving that the gig created.

The only blight on the set was a piece of shit who climbed up on stage and grabbed Grace’s ass. He was lucky that security got to him before Grace or the crowd could lay hands on him. To speak directly to this asshole, you’re the reason we can’t have nice things.

Once he was gone, Against Me! went back into the songs like nothing happened, except with a bit more vicious energy from Grace. They closed with an extended and jammy version of New Wave closer “The Ocean” before returning with a raucous encore that broke down into big hearted, friendly anarchy. Finale “We Laugh at Danger (And Break All the Rules)” was madness. The moshpit, which was already huge, engulfed the entire room. Grace ditched her guitar half-way through the track and spent the rest of the song stage diving and hugging folks in the audience. Against Me! reminded me of an era of punk music I never got to experience. They made the WOW Hall feel like an old fashion basement gig, filled to the brim with hardcore disciples. Early in the set they played New Wave’s title track, asking, “Is there anybody on the receiving end?/Reaching out for some kind of connection?” The answer is yes. A thousand times yes.