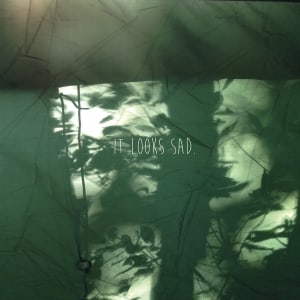 [xrr rating=3.25/5]I’m so glad that the lagging nostalgia wave is finally cresting for the 1980s. I didn’t care for disco the first time around and, while the ‘70s folk-rock and pop revivals have each had their moments, I’ve been ready for the change. Lately, the indie scene is doing their part, with a host of bands mining the fertile post-punk inspiration from 1978 to 1986 or so. My Gold Mask, the Soft Moon, Cold Showers, Soft Kills – it’s more than I can keep track of, so it’s nice when a decent one falls right into my lap. It Looks Sad. from Charlotte, North Carolina joins the throng, but they manage to make their own mark. The music is tight and cathartic with the perfect shroud of echo. More importantly, they aren’t overthinking their angst and thrash or dressing it up in irony. The only (slight) misstep is the emo pretention of the punctuated band name, which remains from their awkward original name, “It Looks Sad. That’s Why I Said It Was You,” but that can be overlooked because it mostly serves as critic/hater-bait.

Their scant four song EP, Self-Titled, barely crosses 15 minutes, but each tune is a delicious morsel of dissatisfied, emotional tumult. “Radical” leads off and it stakes out the ground that the rest of the album will restlessly pace: hang your head, sway just a little and let the ringing post-punk guitars wash through you. The repetition and higher fret bass riffs recall Joy Division, but instead of Ian Curtis’ dark brooding, It Looks Sad. favors a more sullen vocal tone. Jimmy Turner alternates between plaintive, disjointed musing and rousing himself to resentful irritation, but the words are almost irrelevant. All that matters is the stormy wave of muffled frustration that ushers in catharsis. Turner has described “Radical” as a hastily written filler tune, but they seem to have stumbled onto a pattern worth repeating. A shadowy magic builds as his voice gets hoarser and rawer over the pounding breakers of flanged guitars.

The next track, “Fingers,” trades out Joy Division for a hazy, dream pop jangle. Turner’s vocals have the same weak whine and his diffident tone undercuts the love song lyrics. But complaining about his singing is like critiquing Joey Ramone or Lou Reed; his lack of technical ability is less relevant than the earnestness of the emotions that he conveys. It is a love song, but his disconnection is exactly the point. In the meantime, the music is quite satisfying as it lazily unfolds. Rather than a wall of guitars, the verses erect a haphazard fence whose gaps frame the melodic bass line. The chorus swells like a tsunami, but doesn’t so much overwhelm the mood as intensify it. The thick tone and repetition become a nurturing cocoon of noise, “I’m daydreaming again/ Your fingers touch my skin.”

The remaining two tracks offer up differing retro perspectives. “Raccoon” channels the Cure, albeit at a more upbeat tempo. Even the muted artifacts of echoed guitar strum sound familiar. That’s just window-dressing as the driving staccato guitar chop staples down the flowing bass work. “Ocean” also has a touch of the Cure, but the soft-loud-soft transitions showcase the power of Turner’s primal scream, recalling Trail of Dead’s early work. Sure, that’s a bit more recent than the ‘80s foundation It Looks Sad. has established, but the deviation is effective.

Like most EPs, Self-Titled is an elevator pitch for the band. It’s not a best-of-the-year contender or artistic triumph, but it is a solid introduction to It Looks Sad. and their nostalgic swirls of moody distortion feel like a good match for hot summer nights.