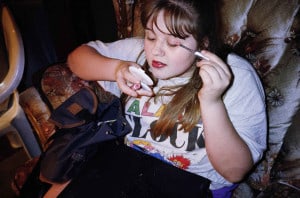 [xrr rating=3.75/5]It’s the mullet that makes you wonder if Moonshine condescends to its impoverished subjects. One of the most memorable images in photographer Bertien van Manen’s new photo book is shot from inside a kitchen. Outside the kitchen window, a man wearing a tank top and blond helmet hair, stands looking inside. It’s a strongly composed, beautifully lit candid, funny and a little unsettling. The image raises a question in a photo book whose subject is the impoverished residents of Appalachia: does it make fun of the outsider looking in, or feel for his plight?

An interviewer who grew up in the region asked Van Manen why collections of her photographs made in Russia were not called Vodka while this survey of Appalachia was called Moonshine. The interviewer’s mistrust of outsiders may be warranted. Naming a photobook after the area’s signature poison does not seem to elevate its subjects. On the other hand, if you can separate the word from its baser connotations, “moonshine” packs a lovely metaphor, the opposite of sunshine, a glow that bathes night owls. It’s a word that’s hard to separate from the besotted, but it is also steeped in poetry.

Besotted poetry is a good description of the photographs in Moonshine. Van Manen claims no patronizing attitude. She grew up in a Dutch mining town, and feels an affinity to the region, which she first visited in 1985 when a professor in Leeds, UK told her about female miners in Appalachia. It takes a special kind of gentle fortitude to approach a potentially hostile community – many Americans, much less foreigners, would have trouble accomplishing this without getting into trouble, if not physically, ethically, leaving themselves open to charges of exploitation. Van Manen recently told Time that it was indeed a challenge. “Sometimes I just went up a holler without knowing anyone, with a pounding heart; it always went well. After suspicion and holding back, people appeared to be intrigued and became hospitable.”

Moonshine consists of black and white and color photos taken during Van Manen’s visits to the area over three decades. Many of her photos look like candid snapshots, out of focus and casually composed. This gives her work its energy, a studied casualness in which photos seem like accidents as a skewed horizon line lets in a stray hand or a child playfully peers up into the frame while the photographer shoots a family gathering in the distance. Van Manen made friends in the area, always staying in her subjects’ homes and, sometimes, trailers. However, despite her acceptance into the community, there is still a sense of unease. Some of Van Manen’s subjects gaze back at the lens with suspicion. In group shots, bodies are sometimes hidden behind pillars, faces sometimes turned away, which creates a tension that is belied in Van Manen’s introductory notes of an inevitably welcoming community.

Moonshine is van Manen’s third book for Mack, and it’s as handsome as any monograph in their catalog, hardbound in olive cloth with a mysterious off-set dot printed cover depicting what looks to be a woman walking into the woods, away from the photographer. An essay documents a long history with her subjects, but as the photos attest, it’s a complicated relationship. This is not to say that all or even most of these candid portraits are antagonistic. One of the most striking images, and among the most classically composed, is a black and white portrait of a young man standing in front of a stack of television sets with his grandmother in front of him, leaning her head back on her grandson for support. Moonshine is not a sociological document of poverty, but like the recent documentary feature Rich Hill, it’s an impressionistic look at a part of America that most citizens would rather ignore.