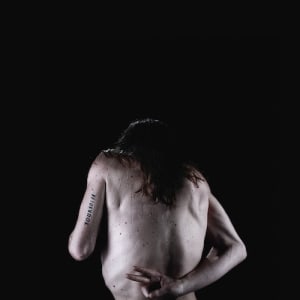 [xrr rating=3.0/5]When JJ first broke onto the scene in 2009, the Swedish indie-pop duo’s brand of soft-spoken, lovelorn indie-pop caught many off guard. The act seemed to come out of nowhere, and the songs struck a chord in people’s chests, as JJ (or jj, as they were branded back then) assembled songs through simple yet sophisticated stylings, generating immediate access to its wishful—and sometimes wistful—thinking. After a sophomore effort and a number of EPs, the duo is now back, ready to build on its experience and elevate its sound with V, the band’s third proper LP.

There is a brief moment at the album’s onset where the familiar sample of JJ’s “Things Will Never Be the Same Again”—the lead track from the band’s excellent debut, jj n° 2—rises from the discord. But just as the familiar arrangement begins to bulge, it’s interrupted by an off-putting ding that fades into the gorgeously crafted and sonically mesmerizing “Dynasti.” The shift is at first stark, but it’s telling of where the duo of Elin Kastlander and Joakim Benon stand: JJ is bigger than ever before.

While the duo still flexes their genre-bending muscles, crisscrossing hip-hop sensibilities with indie-pop-minded hooks and melodies, V very much feels like the band has reached a new level. The capitalization of the band’s name isn’t just for shtick; it’s a genuine reimagining of what the band can achieve. Quite literally, on V, the band has capitalized on its strengths and perpetuated an album that at once sounds bigger, bolder, brasher. The record strives to establish JJ as more than a fledgling digitized duo.

To that end, the album does its job. V swarms with a variety of sounds and instruments. Each song is textured with layers of samples, strings and rhythms. “Dean & Me,” a companion piece to jj n° 2’s “Me & Dean,” features a heavy dose of thumping beats and breezy atmospherics; “All White Everything” showcases wistful, sonorous vocals before giving way to a swath of expansive synths and clamoring keyboards; “Fågelsången” touts a lighthearted, mid-tempo arrangement that’s boosted by pulsating drum beats, meandering strings and dual vocals. It’s clear that JJ knows what they’re doing, and on V, the duo is certainly making the most of calculated, cultivated sound.

But while that sound is indeed broader and more self-assured in approach and execution—and, according to the band, more in line with the kind of music that Kastlander and Benon have always wanted to play—part of V feels like business as usual. There is definite growth showcased throughout, as Kastlander’s vocals sound more confident than ever, and Benon’s musicality features a wider assortment of instrumentation and sonic dimension, crafting a tighter, more refined sound. The production is bigger and the quality is braver, but other than those added dimensions, JJ captures much of the same sentiments as it has on past efforts. Beyond production, limits are rarely tested and boundaries scantly breached.

Still, V is an impressive culmination of JJ’s brand and skill set; but if the album is the indeed the career-defining moment that everything has been leading to—as Kastlander and Benon have expressed—then we must wonder if this is it. There is an understandable comfort in accomplishing a record like V, but how long will JJ remain in a progressive pattern of refinement rather than development? How long before they become stagnant or regress? If V tells us anything, it’s that there’s so much more that JJ can pull off. Kastlander and Benon may think they’ve hit their apex, but it’s quite possible they’re only scratching the surface.