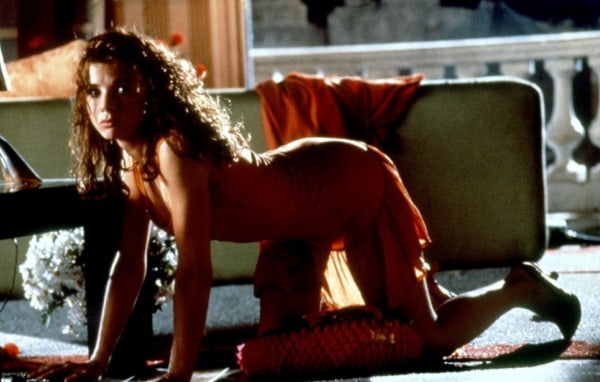 Following his relatively tame, Academy Award-nominated international breakthrough, Women on the Verge of a Nervous Breakdown, Pedro Almodóvar went back to his more customary territory of sex and violence for Tie Me Up! Tie Me Down! Despite the fact that it was instrumental in introducing the NC-17 rating to the US, it managed to gross a cool four mil in 1990 – just at the beginning of the burgeoning American indie bubble. That’s fitting, because in a way, this is a movie that’s built off the word “despite” – as in “I was shocked to find this movie kind of a sweet romance, despite the fact that it’s about a psychopathic stalker who kidnaps and then ties up the junkie porn star object of his affections.” Comically disturbing, the film is driven primarily by its unwavering commitment to its premise, its gentle tenderness towards its characters and by Almodóvar’s gleefully shocking sense of humor in the face of horrific behavior.

The issue of responsibility comes up often in relation to this film – its biggest critics say that it’s abhorrent, that it rewards, or at least ignores, the disturbing qualities of its lead. Jonathan Rosenbaum suggests that by choosing to make Marina (Victoria Abril), the female lead, a junkie porn star, Almodóvar judgmentally pardons Ricky’s (Antonio Banderas) behavior towards her by devaluing her, that (sarcastically) “it’s OK if you’re simply trashing a trashy woman.” I find that conclusion somewhat judgmental in itself and instead suggest that perhaps the fact that she’s had problems in her life, problems she has by this point managed to overcome, or is still successfully struggling against, she is able to understand and empathize with the sorts of problems that Ricky has. What is a stalker except a junkie of love? I mean not the still-functioning doctor kind of junkie, but the cracked out, deluded, totally desperate kind. The kind who builds himself an illusion and pursues it unrelentingly, the kind that the movie suggests Marina once was. 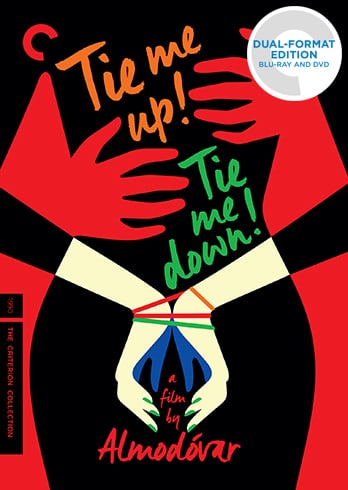 Empathy is what drives Marina’s eventual affection for Ricky, just as it seems to drive his desire for her in the first place. “I want to be a good husband to you, and a good father for our children,” he tells her while she’s bound and gagged, with complete sincerity, near the beginning of their courtship. Banderas’ committed performance, the conviction which he brings to it, pulls plausibility seemingly out of thin air; Abril’s gradually softening glances, her anger turning to frustration and then sympathy, they play it through. Whether it’s Stockholm Syndrome, a last desperate leap towards ambivalence or a genuine love is still, ultimately, left unsettlingly open, and that’s part of the movie’s ultimate worth – that it doesn’t give you any easy answers.

Almodóvar’s tremendous facilities as a filmmaker and entertainer allow for the central love story to feel correct, partially because it continues along the same arc as any traditional romantic comedy would (a committed pursuit by a lout who reveals his soft side, which the female lead initially finds incorrigible), and partially due to the conviction of the actors. Still, the setup doesn’t stop creeping us out, Ennio Morricone’s demented theme music for Ricky, an epically weird piece of wistful synthery, never stops indicating to us that, yes, this dude is nuts, and our doubts never fade away. Our sense of good will and hopefulness simply grows alongside them. Near the middle of the movie, the authenticity of their tenderness towards one another is corroborated by the film’s centerpiece sex scene, a drawn out, very sweet and, uh, sexy sequence that all but confirms they’re at least giving it a shot. Who knows if it will work out? By the time Marina’s been freed, she asks Ricky to tie her up before he leaves in case she decides to run away; their arrangement has already turned into a pointed parody of domesticity. But why would you root against them?

(This review first appeared on Spectrum Culture on 6/24/10)

This author has not added a biography. Meanwhile Andrei Alupului has contributed 82 posts. Click here to view them.