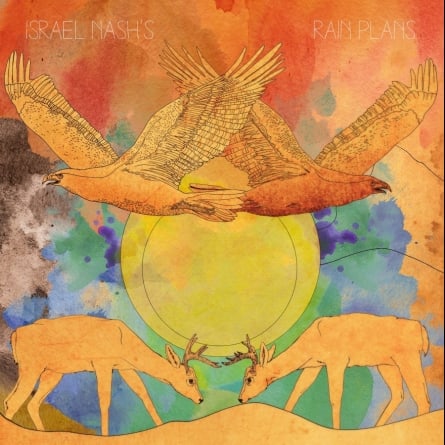 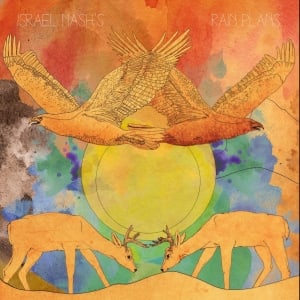 The overused shorthand, “retro,” can mean that a group short on their own ideas has repackaged the past. Although Israel Nash Gripka’s country-rock/Americana infused music raises immediate comparisons to a host of classic folk-rock acts, Israel Nash’s Rain Plans is hardly a slavish (or lazy) re-creation of history. Instead, he’s applied a master craftsman’s aesthetic to expanding what might have started as simple singer-songwriter tunes. The resulting album features richly layered instrumentation that draws on acoustic and electric sounds, soft-diffusion reverb to cosset the mix and, above all, a worshipful appreciation for warm analog tone. Casual listeners may hear it as a pastiche of The Band or early Neil Young, but the details reveal Gripka’s original perspective, driven by some of the same values.

Rain Plans begins with “Woman at the Well.” While the initial intro recalls John Fogarty and Creedence Clearwater Revival, the melody on the first line comes straight from “The Weight” by The Band. Instead of pulling into Nazareth, he calls, “Swing low, Laura/ I’m up to no good.” The oblique lyrics that follow suggest a man reminiscing from the end of his life’s road, with the calm delivery and steady pace signaling an acceptance. The song’s familiar elements are on the surface, but the texture of the piece demonstrates Gripka’s unique voice. He uses acoustic guitar as a canvas for the overdriven guitar to splatter trails of warmly fuzzed fills. Meanwhile a thin haze of shimmering synth wash fills up the background. The last minute and a half or two become an extended fade, where the fog of distortion rises like an inevitable tide, obliterating everything. By the end, it owes as much to My Morning Jacket as it does to those earlier bands.

“Woman at the Well” is a fine start, providing a good lead-in for the distorted steel guitar on the country rock of “Through the Door.” The arrangement on this one is perfectly constructed, with each element seamlessly in place. The verses are country while the chorus has more of a blues rock feel. The balance is a little psychedelic. This intensifies as things get interesting about half way through the piece. It breaks down to a thoughtful interlude, centered on the simple repeated guitar riff from the verse. The other instruments layer in with each repetition, and once they’re all on board, the song restarts, but in a spacier mood that turns soulful and intense.

It’s not until “Who in Time” that the Neil Young spirit begins to infuse the album in earnest. The trippy intro groove has a twangy psychedelic feel, but the transition into the verse sets up a “Down by the River” sway, and then a touch of harmonica adds its contribution. The backing harmonies, along with the light pedal steel, cement the mood. Eventually, Gripka’s vocals slide into Young’s slightly nasal falsetto, first on occasional lines, and then more strongly on “Rain Plans” and “Iron of the Mountain,” finally hitting a peak on “Mansions,” which crosses Young’s “Southern Man” with “Cowgirl in the Sand” and “Like a Hurricane.” But for all those allusions, Gripka’s song makes its own statement about hollow excess as it swells into a hypnotic swirl of crackling sparks of chaotic sound.

It’s easy to imagine these songs shrunk down to solo arrangements; Gripka’s voice and personality could handily carry them. Still, there’s a joy to soaking in the sound of a group as they pick up on each other’s nuanced playing, each finding the ideal addition. Bottom line, the real surprise is that Israel Nash Gripka hasn’t hit it bigger here in the U.S. We’re arriving late to this party; Rain Plans initially came out last year in Europe and is only now releasing in North America. It’s obvious to hear why he’s been embraced overseas. His sound is completely American in the best possible sense; its folk, blues and country rock sound are expansive but not excessive. Stick this one on repeat and play catch up with the rest of the world.