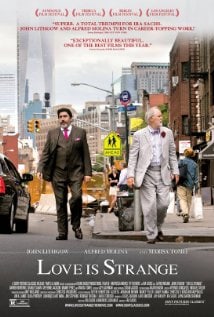 [xrr rating=2.75/5]Ben (John Lithgow) and George (Alfred Molina) are couple who have been together nearly 40 years, but can finally marry. They seem content: Alfred teaches music, Ben is a painter, they share a desirable Manhattan apartment. But director Ira Sachs isn’t interested in his characters’ domestic bliss. Instead, Love is Strange tracks the maddening days that follow Ben and George’s marriage as they can no longer afford their home. But rather than focus on these potentially engaging characters, Sachs takes Love is Strange into a territory where elliptical storytelling puts a stranglehold on any chance of building an affection for Ben and George.

Love is Strange wears its agenda on its sleeve. When the pair marry, George loses his job at the Catholic school where he teaches music. Although everyone there has known about homosexuality for years, his tying-of-the-proverbial-knot angers some bishop somewhere and George is out on the street. Forced to downsize, Ben and George go through that awkward moment of homelessness as they search for a new place, relying on friends and relatives to put them up (separately) in the interim.

Sachs could have easily made the same film with the same points without getting so damned tragic. Being in between homes is quite a mundane situation, one that could have been used to eke out character development, especially in fish out of water sequences. Instead, Sachs gets all grandiose on his audience, using the situation to rain down tragedy upon Ben and George. Maybe this angle could have worked, but since we get so little time of normalcy with the pair, relying instead on the goodwill the leads have built with decades of strong acting, it’s difficult to really care about them.

Adding to the ho-hum feeling is the cast of weak supporting characters that take in George and Ben, each struggling with problems of their own and most of them none too polite to their new houseguest. George gets off easy, living with some friends whose only sin is to have too many other friends over. Meanwhile, Ben is forced to live with nephew (Darren Burrows), his shrewish writer wife (Marisa Tomei) and their teenaged son (Charlie Tahan), who is involved in a ridiculous subplot of stealing French books from his school. Almost immediately, the trio seems bothered by taking in Ben as a guest. I understand that it makes good drama to separate Ben and George, but is what they are doing preferable than a month together in Poughkeepise? The horrors of upstate New York!

Logic lapses such as that one that make Love is Strange such a slog, especially since Lithgow and Molina do give strong performances. Unfortunately, the time they share on the screen is little. The scenes where they are together are easily the strongest, like when they go to find housing help or go out for drinks near the end of the film. Scenes like these are off-set by family fighting, especially in Ben’s situation as he is clearly not a wanted guest in his uncle’s house. I wanted less of the crappiness and more tender moments between Ben and Alfred.

If Love is Strange is about more than the discrimination that rips about Ben and Alfred, then Sachs has not succeeded, especially since his supporting characters are so awful. He does depict the various stages of love: marriage, infidelity, death and then those awkward glances and smiles that kick the whole thing off. But if that’s the case, there are two disparate films happening at the same time here. I want the one where Lithgow and Molina are front and center.