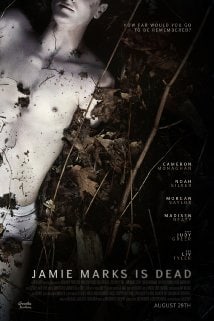 [xrr rating=2.0/5]The trouble with much young-adult fare hinges on the treatment of youthful aimlessness as something profound. With newly-activated hormones pumping through their systems, yet still bound by the strictures of being dependent minors, teenagers are prone to act in impetuous ways. This volatile phase of a young person’s life can serve as fertile ground for storytelling, and many coming-of-age tales are among the best we’ve conceived of as a people. But too often, YA drama sacrifices meaningful character development in favor of good-looking youngsters acting all morose, their plights cast as significant for no other reason than that they are the young protagonists.

Carter Smith’s Jamie Marks Is Dead suffers greatly from this pitfall. Opening with the titular decedent blue-skinned and nearly naked on a forest floor, the film focuses on cross-country running star Adam (Cameron Monaghan) and his burgeoning love interest Gracie (Morgan Saylor), the only two kids at school who apparently feel anything significant about the death of an oft-bullied loner. Adam goes over to Gracie’s house to check out her elaborate rock collection, only to discover the ghost of Jamie Marks lurking outside in nothing but his boxers. Gracie warns Adam not to talk to the apparition, but before long Adam and Jamie are inseparable bosom buddies for no reason in particular.

Jamie Marks Is Dead’s greatest flaw lies in its failing to distinguish the motivations of its characters, both living and dead. Maybe Adam is drawn to the spooky-whispering Jamie because Adam’s older brother Ronnie (Ronen Rubinstein) is an insufferable bully. Maybe it’s because Adam’s mother (Liv Tyler) has been rendered a paraplegic due to a car wreck that was entirely the fault of his mother’s friend (Judy Greer), who now spends all her time at their house, in a heavy-handed and completely superfluous side plot. Perhaps he’s suddenly inseparable from a dead kid for the reason he states but never pursues: he wants to help figure out who murdered Jamie.

But Jamie isn’t interested in finding his killer, which is a welcome diversion from the norm for this type of a film. Still, Jamie’s motivations are just as murky as those whose hearts still beat. He shows Aaron how they can teleport from his closet to Gracie’s through some otherworldly vortex. He suggests a sleepover in the barn of another ghost named Frances (Madisen Beaty), who spends each night murdering her parents over and over for equally oblique reasons. And most of all, Jamie gets off on Aaron whispering single random words to him.

Though Jamie Marks Is Dead is aimless, it’s partially redeemed by stark, crisp cinematography. A pale color palette and well-framed shots (often utilizing mirrors and other reflective surfaces to play around with dimensions) make the film visually compelling, even if the story gets fuzzy and uninteresting. The sound editing aspires to a Donnie Darko level of foreboding, and for the most part it works too, though Jamie’s breathy, slightly-otherworldly voice is a tad forced. I have no idea what drew Liv Tyler or Judy Greer to this project, as their roles are largely unimportant to the story and do nothing to play to either actress’ strengths. Though it does a fair enough job of setting up the ominous tone, Smith’s adaptation of Christopher Barzak’s 2007 novel One for Sorrow is another YA misfire. Despite some visually and aurally interesting moments, as a story, Jamie Marks Is Dead remains lifeless.