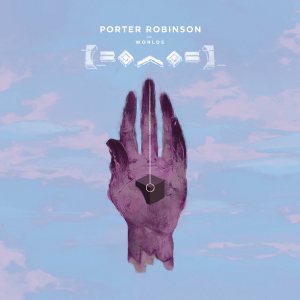 [xrr rating=2.25/5]The party line on Porter Robinson is that he’s out to save EDM from itself, and it’s not wholly untrue. Robinson recently turned 22, which is probably around the median age of the average Spring Break festivalgoer whose fawning attention and thirst for all things brostep made him a teen star. Yet on debut full-length Worlds and in the press blitz leading up to its release, Robinson’s gone out of his way to distance himself from EDM. Interviews with the songwriter-producer confirm that Worlds is intended to retain only the abstracted ghost of the sensational genre – woofer-busting bass volume, a sustained sense of nail-biting climax, and day-glo synthesizers – while stepping toward pop song structure and away from those heinous gastro-gurgle drops. Success?

Even when it’s most removed from the context of EDM, Worlds still sounds like a pop album gone monogenre in the most club-friendly way, and it’s usually not quite so far removed; most songs do in fact play out according to EDM’s standard models, including a surfeit of bridges comprising suspended silences and gigantic blasts of synthetic bass. Not even the most song-like constructions here – mostly, that means the pleasant single “Sad Machine,” which even features Robinson himself singing, rather than a member of his rotating cast of guest vocalists – fail to attain the sense of internal cohesion or narrative thrust they need to succeed first and foremost as something other than vocal-heavy dance cuts. That’s not necessarily a bad thing, but it means that for all the hype and the careful self-presentation, the record ultimately embraces rather than rejects, subverts, or reinvents generic conventions.

The title of Worlds is supposed to signal the immersive experience it heralds, a nod to the videogames and anime films Robinson loves and the nigh-mystical sense of psychedelic transcendence with which the whole album is shaded. But Robinson’s unusual (and compelling) selection of sources and influences doesn’t fully translate to an unusual and compelling musical aesthetic. The opening one-two of “Divinity” and “Sad Machine” is one hell of a hook-stuffed gambit, a pair of supremely catchy, starry-eyed electro cuts mounted on IMAX scale, but they’re also dead ringers for bottomed-out Passion Pit B-sides, right down to the cut-up vocal bleats that bring a sense of texture to the shimmering keyboards. Indeed, in looking away from EDM, Robinson tends to fix his gaze on its closest equivalents in indie culture. There’s much more than a whiff of Discovery-era Daft Punk to the wind-up guitars of “Flicker” and the vocoder-filtered lullaby that closes out “Goodbye to a World,” and M83’s Hurry Up, We’re Dreaming is an unmistakable reference point, its operatic grandeur and neon-streaked embrace of all campy things ‘80s providing an obvious antecedent for Robinson’s unabashed indulgence in a pompous sense of scope and the glitch, dated earmarks of ‘90s videogames.

These are all good acts and Robinson isn’t a half-bad imitator; the problem is that they’re not very exciting. In a time when various types of subtler dance music stand at the cultural vanguard, Robinson’s attachment to providing the same pleasures as his least interesting peers seriously hampers his ability to venture outside the box. Robinson’s success at breathing new life into EDM is doomed to damning relativity; that sounds like these are expected to shake up the genre says much, much more about how stale this style of EDM has grown than about the sophistication or creativity of Robinson’s music itself. Penultimate track “Fellow Feeling” is most tired thing here, all gaping builds and stuttering, clobbering low-end blurts sandwiched between atmospheric synth swoons. Given Robinson’s ambition and evident good taste, it would be wonderful to say that “Fellow Feeling” is a disappointing moment on a record that deserves better, but it just isn’t true.