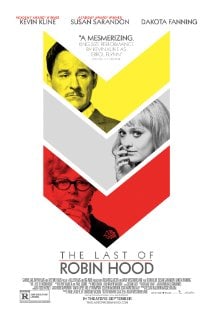 [xrr rating=2.0/5]Made-for-TV biopics are full of hammy performances and caricatures of classic stars. Writer-directors Richard Glatzer and Wash Westmoreland’s The Last of Robin Hood, however, is not a TV biopic, and its failings are all the more glaring for that. The focus is on the last years of consummate swashbuckler Errol Flynn’s life and, in particular, his penchant for dating underage girls. And the script itself follows the usual format of the sordid docudrama while touching on themes such as the temptation of stardom and the convergence of media sensationalism and aging ego. Although based around actual events, the film is a largely fictional – and troublesome – account of Flynn’s last years and his relationship with a young actress and her ambitious mother.

Beginning in the late ‘50s, the film paints a clear picture of the womanizing Flynn (Kevin Kline), prowling the studio lot and ogling young dancers. Handpicking Beverly Aadland (Dakota Fanning), Flynn runs through his usual moves of promising auditions and Hollywood success and the two quickly begin a relationship. The only problem is that Beverly, while passing for 20, is actually only 15 years old, and Flynn had already gone to trial for statutory rape. Enter Florence (Susan Sarandon), Beverly’s mother and Flynn’s accomplice in carrying out this illicit relationship in a more publicly seemly manner. It’s evident from the very beginning that Florence lives vicariously through her daughter and leaps at the chance to advance her career via Flynn, despite his impossible-to-mistake intentions. Beverly gets a small part on a John Huston shoot in Africa, a starring role in Flynn’s Cuban Rebel Girls and a marriage proposal on her 17th birthday, but when Flynn’s years of alcoholism bring an early —though not unexpected—death, Beverly and Florence meet the full force of the tabloid press.

Kevin Kline is such a natural choice to play Flynn that I had to check to be sure he had never done it before. Unfortunately, this portrayal never goes beyond impersonations. Too often, it feels as if Glatzer and Westmoreland saw Kline emerge from makeup and costume and exclaimed, “Our swashbuckling Flynn!” They certainly didn’t provide him enough material to actually engage with the character and move beyond what is, at best, a good Halloween costume. But since the film approaches this story more from the point of view of Beverly and her mother —Florence essentially guides the film with occasional voice over narration—the most important performances are Fanning’s and Sarandon’s. And if Kline is disappointingly unengaging, Fanning and Sarandon are utterly flat. Playing Beverly with doe-eyed innocence gives the audience a cursory understanding of the character, but Fanning never moves beyond that to show any true emotion let alone motivation. And Sarandon simply turns on the tired alcoholic mother routine and can’t manage to deliver her lines naturally.

The script is partially to blame for these lackluster performances; it has major flaws. Chiefly, The Last of Robin Hood refuses to point fingers in the illicit affair between Beverly and Flynn. Much of the film is instead intent on painting their romance as one based on true love. Flynn is a charming womanizer with a sordid history, and his pursuit of underage Beverly is quickly forgiven with the simple knowledge that he believed her to be older than she was. And that is the key factor that serves to divert attention from the instigator of this affair and to heap the blame on Florence, the mother who saw her dreams of fame dashed when she lost a leg (a seemingly important detail that is mentioned only fleetingly), raised her daughter “groomed so carefully to seem older than her years” and turned an unconvincingly naïve eye to the realities of Flynn and Beverly’s relationship. Even Beverly is portrayed as pure and innocent rather than a conniving gold-digger.

Certainly, an Errol Flynn whose intentions were more direct and not muddled in the mother-daughter fallout between Beverly and Florence would have been a far more intriguing character than Kline’s watered down version, but that is emblematic of the film’s failings. Sugar-coated doesn’t begin to describe how superficial The Last of Robin Hood is. In terms of the production, Glatzer and Westmoreland seem to have made specific production choices in an attempt to recall films of the ‘50s, but its hokeyness merely distracts. The color palette, in particular, mimics the color of the ‘50s – still somewhat of a novelty. Unfortunately, most of the film is harshly overlit and washed out. The corners that were cut for budgetary reasons are similarly all-too visible. Corny rear-projection for car rides and never-ending newspaper montages, especially, annoy rather than play to nostalgia.

From its by-the-numbers format to its truly uninspired performances, The Last of Robin Hood squandered all of its potential. The story itself is history yet even where fiction could enrich fact—in the personal angles of the film’s unorthodox trio—blame is virtually nonexistent. The result is an emotionally lacking story about three half-realized characters.