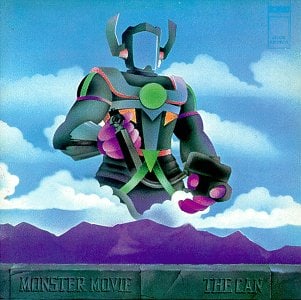 In the 45 years since the release of their debut LP, Can has only gotten more popular, gradually escalating from an obscure German experimental outfit to a group that now sits comfortably beside the Velvet Underground on the shelf of indie influences. Like Lou Reed’s raucous collective, Can represent a compelling meeting point of avant-garde musical theory and pure, soupy noise, a simultaneous existence in the high- and lowbrows that never resolve to the middle. A vinyl reissue of their albums is both welcome and long overdue, and Mute has started by releasing their first four.

Can was formed in response to the Velvets when Irmin Schmidt and Holger Czukay, then studying under pioneering electronic composer Karlheinz Stockhausen, were turned onto the band and suddenly realized the possibilities of ostensibly primitive rock music. Schmidt and Czukay augmented their respective keyboards and bass with Jaki Liebezeit’s drums and Michael Karoli’s guitar and, enlisting U.S. expat Malcolm Mooney, released Monster Movie in 1969. For the LP’s first side, Can’s debut sounds like straightforward psychedelic rock, albeit of a sort that betrays more musical competence and theoretical grounding than most people riding distortion and feedback all the way beyond the solar system.

No Can album—from their classic period, at least—relies so heavily on Karoli’s guitar, with screaming leads leaping to the fore in “Father Cannot Yell” and a crunchy riff blending with a bluesy harmonica in “Outside My Door.” Everything is, in a relative sense, conventional, until the second side’s sole track, “Yoo Doo Right,” fades up. The 20-minute epic typifies Can’s future approach, whittling down mammoth studio jams into cauldrons of loops, hypnotic riffs and sudden upheavals of signature and key. Karoli’s dominance over the first side gives way to a true band dynamic, and it is here that you can hear the Czukay-Liebezeit interplay that will become the single most important element of Can’s sound. The song undergoes several undulations that build and recede, but the drum and bass synchronization is a constant. Avoiding busy rhythms, the duo nonetheless weave a complex, intricate shared noise, with Czukay’s forcefully played chords attaining a percussive element that sounds like a snare, while the fluidity of his lines sets Liebezeit’s rolling, loose patterns.

Soundtracks, as its title would suggest, is a collection of compositions written for several contemporary German films. Given the brief running time of most of the cuts, the compilation cannot showcase the band’s great strengths with lengthy, zoning trips, but the variety of composition on display nonetheless shows off their chops. “Tango Whiskyman” foregrounds the drums while vocals line up with the bassline and guitar primarily acts as color for Czukay’s driving rhythm. Both versions of “Deadlock” are led by Schmidt’s scorching keyboards, which whine in sustained clusters. “Soul Desert” is one of the first displays of Can’s truly funky side, with Czukay’s walking bass not so much contrasted as antagonized by Karoli’s spiky chordal intrusions. “Mother Sky” runs long enough to really show off how quickly Can were growing: Karoli opens with a Hendrixian solo that continues for minutes before Liebezeit takes effective lead. Despite unfolding at a near-gallup, “Mother Sky” is every bit as spacey as the more relaxed numbers.

Part of this owes to the droning tones of new vocalist Damo Suzuki, a Japanese busker the band encountered in Munich. Appearing on most of the Soundtracks songs, Suzuki replaces Mooney’s clipped, Reedian speech-song with a style that still doesn’t quite add up to singing, exactly, but aligns better with the trance nature of the band’s playing. If Can always represented a sonic democracy, Suzuki helped them achieve the true balance of individual parts. Suzuki’s presence on the last two albums of this series of reissues coincide with a leap forward in conceptual unity that sees the band elevated from an accomplished acid act to a monumental outfit.

The double-LP Tago Mago is perhaps Can’s quintessential album, the combination of the overall and individual song lengths begging for the descriptor “sprawling.” Yet the true sprawl lies in the increasingly unraveling structure of the album, moving from airtight bursts of oil-fire funk to, at last, tape-looped fantasias that border on musique concrete. The range covered is jaw-dropping: “Mushroom” is a classic radio staple in an alternate dimension, with a skittering drum pattern laying down the funk as guitars bleat and echo over hushed vocals that make nonsense sound urgent and ferocious. “Aumgn” and “Peking O” are shrieking collages that use the shaped form of tape loops to craft something seemingly formless.

“Halleluhwah” is the nonplus ultra of stoner music, the rhythm at once content and rumbling with oncoming paranoia, Schmidt’s electronic tinkering flickering in as if intercepted from radio waves emerging from deep space. Suzuki yelps, scats and moans just ahead of the musical direction, as if possessed with the ability to forecast the composition a half-second into the future. Unpredictable after a dozen listens, “Halleluhwah” is the greatest Can song, a sidewinding composition that seems to be directed less by any individual or shared musical impulse than the wind and water currents themselves.

If Tago Mago shows off the myriad sounds that make up Can, “Halleluhwah” fuses them into one song, a feat stretched to album length for the band’s greatest triumph, Ege Bamyasi. Pared back down to a single disc, the LP is pure avant-funk, maybe the most danceable that experimental music gets. Nowhere is this clearer than on “Vitamin C,” an ode to ascorbic acid that privileges Czukay’s burbling bass and generally features some of the cleanest keyboard and guitar lines in the band’s repertoire, though the inclusion of some shortwave whistles and screeches suggests that this citrus punch has been spiked. Elsewhere, semi-hit single “Spoon” bounces to percolating rhythm and vocals, “Soup” makes its 10 minutes of aggro-psychedelia feel like four and “Swing Swan Song” even works as a ballad.

The best, and perhaps only, point of comparison for Can’s musical development during this period is the parallel developments in Miles Davis’ musical direction. Tago Mago, with its experiments in edited jams, acid-funk, knotty (but not quite free) jazz, echoes the volcanic Bitches Brew, while Ege Bamyasi’s simultaneous tightness and deconstruction could be a midpoint between Jack Johnson and On the Corner. This first set of Can reissues covers most of the band’s best days, yet if the band peaked early, the speed of their development across these annually incremental releases remains stunning. Many groups mature by growing from youthful incompetence to polished professionalism, but Can were maestros from the start. Instead, the growth over these four albums shows a monstrously capable unit moving ever more confidently into the future. Only now does anyone seem to be catching up to them.