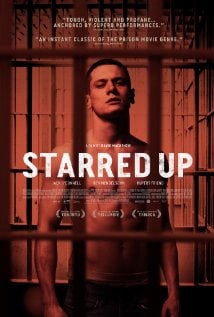 [xrr rating=3.25/5]The prison drama typically provides a series of expected elements, from brutal violence to a fleeting shot of redemption/rehabilitation for its principal characters. Starred Up, the latest by Scottish director David Mackenzie, doesn’t stray far from these tropes, but still delivers a frightening and visceral experience. It begins with the procedural sequence of the young Eric Love (Jack O’Connell) being processed. Mackenzie does not frontload his film with exposition, and we watch as Eric calmly strips, squats, sports new clothes and then, once he is secured in his cell, proceeds to make weapons from his shaver, toothbrush and other mundane items. Eric is a man who knows violence, and it doesn’t take long before he is up against the equally vicious guards at this new penitentiary.

Written by Jonathan Asser, based on his own observations as a prison counselor, Starred Up is a tough film that offers only faint glimpses of hope for its characters. The men in this prison are brutal, angry individuals who have no qualms about shanking someone. Eric has been “starred up,” meaning that he has been transferred early from a youth facility to a prison for adults. Unable to control his anger, Eric fits right in, and it doesn’t take long before every scene is a struggle of life and death for the young man.

Mackenzie doesn’t waste time with backstory, but the genesis for Eric’s rage can be squarely pinned on his father Neville (Ben Mendelsohn), who has been in jail since his son was a boy. Neville also happens to be incarcerated in the same prison and makes it his mission to look out for Eric. However, Eric is anything but a new fish, and he makes his entrance known with ferocious and brutal violence.

Starred Up is much more than a father-son story as Mackenzie and Asser look at numerous aspects of life behind bars. We see not only how the men interact, surviving and not surviving based on guile and pecking order, but how the people running the jail are even more corrupt than the people they are tasked to watch over. Cross the wrong criminal and you might have your back stabbed. Cross the wrong guard and you will fall victim to murder done up to look like a suicide.

After his first outburst, Eric is conscripted into joining a therapy group run by volunteer Oliver (Rupert Friend), who allows his patients to use the time to fume, feud and forgive. While effective, the people running the prison are looking for reasons to shut it down. Even though the men in the group challenge one another and frequently fight, the therapy helps them form a bond that saves Eric’s skin more than once after he pisses off some powerful elements on the block.

Anchoring the film is O’Connell’s performance, just as blistering and terrifying as Eric Bana in Chopper and Tom Hardy in Bronson. He is a young man who knows nothing but violence and can’t help but resent his father’s sudden re-appearance in his life. As he begins to navigate the system, learning who he can trust and who he cannot, Eric branches out beyond Neville’s clique, angering his father. A showdown of some sort is inevitable, but Mackenzie and Asser keep things moving as organically as possible without resorting to Hollywood emotional crescendos.

If Starred Up falters anywhere it’s that caring about the characters is difficult. When they do speak, it’s in thick accents. But these are hardened criminals after all; there is no cuddly, wrongly accused Andy Dufresne. For fans of hard-hitting drama that pulls no punches, Starred Up is a provocative if downbeat film that will likely grip you from its opening scenes to the end.