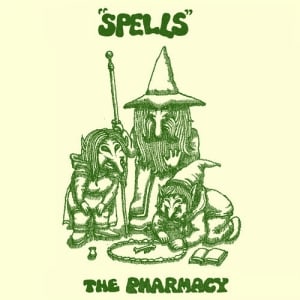 [xrr rating=2.25/5]By the time you have read this, the Pharmacy will have ceased to exist. Two weeks before the release of Spells, the band announced on their Facebook that they were going to “explore different creative outlets.” In all honestly, I can’t say I’m all that disappointed that this will be the last that we hear of the Pharmacy, though I won’t be jumping for joy either. Given that the band spent most of their career struggling to find an identity or an artistic focal point, the cohesion of Spells should be seen as something of a triumph, but at its best, the album’s muted production and lackadaisical songs make for something that aspires to be likeable and not much more.

It’s not really a great sign when you can tell what’s in a band’s record collection from the first 10 seconds of the first song on their album, and Spells does too good of a job at betraying the band’s psychedelic influences right from the outset with “Dead Friend.” Now, there really isn’t anything all that wrong with trying to sound like the music that you love, and the Pharmacy’s commitment to the hazy, druggy aesthetics of Spells indicates a passion for this sort of music. However, it’s still up to you to do something with those old ideas, and this is where the Pharmacy start to fall apart. Spells doesn’t offer a particularly new or interesting take on this kind of music, nor does it serve as a sort of loving homage. It’s just sort of there, a slacker-lite take on the sort of garage and psych rock that plenty of other artists are doing better. In a world where someone like Ty Segall puts out record after record at a blistering pace, it’s hard to really muster up the courage to care about the Pharmacy.

Having said all of that, Spells isn’t necessarily a bad record. Given the long and winding path that the Pharmacy have taken to get to this point, Spells is a surprisingly coherent, tight piece of work. The overt country-rock textures of their previous record are minimized here, and the more straightforward rock approach suits the band much better. The hazy production of Spells also makes for compelling listening when paired with the right song, such as the title track or the swirling “Cool & Calm.” There’s plenty of charm and likability on Spells, but likability can only get you so far.

Perhaps some artists only aspire to make this sort of record, an amiable collection of songs to show to friends or something. In that case, the Pharmacy can break up knowing that they accomplished everything they set out to do with this band. Still, for all its positive attributes, Spells is an empty and ultimately forgettable take on a genre that is experiencing a glut of practitioners and imitators. One can only hope that the now ex-Pharmacy members will show a little more verve and effort once they get to exploring their new creative outlets.

The Mountain Goats: Getting into Knives

Rather than attempting to re-create his glory days, John Darnielle revisits and enriches t…