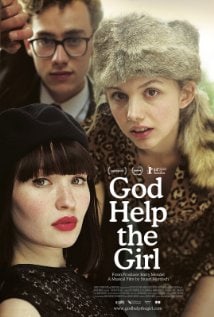 Eve (Emily Browning) is a young woman whose low self esteem is so incapacitating she’s institutionalized. She’s also a coy, calculating chanteuse with the confidence to front a twee indie pop band. Eve is both things before the opening credits of God Help the Girl are over, and that’s just part of the film’s problem. Belle and Sebastian front man Stuart Murdoch wrote and directed this feature length musical adaptation of his own album project God Help the Girl, which featured members of Belle and Sebastian backing up female vocalists (and guests like Divine Comedy’s Neil Hannon) on a concept album about a girl’s coming of age. It’s a nice movie to listen to. Watching it is another matter.

One of the problems is that the first-time director translates his music to film so goddamned literally. The dramatic build-up to “I’ll Have to Dance with Cassie,” for instance, becomes the frenzied hunt for Cassie (Hannah Murray) … so Eve can dance with her. “Pretty Eve in the Tub” is naturally illustrated by Eve in the tub, a queue forming down the hall as if a picture book is necessary to explain the lyrics about all the boys queuing up to scrub her.

This lack of visual imagination might be forgivable if Murdoch had consistently shaped his actors’ performances. When I see a coming of age movie about sensitive, twee kids trying to find their voice in a sensitive twee pop band, I want some indication that these kids are awkward ugly ducklings who break out of their shells and find the confidence that eluded them: that they become who they are meant to be. The biggest problem with the movie is Emily Browning’s Eve, whose character is for the most part an irritating, smug little twerp, not a sympathetic girl whom we hope God helps usher gently to womanhood. Since Browning does convey vulnerability at sporadic moments in the film, the fault must lie squarely on Murdoch for failing to guide his charge through a realistic arc of finding her voice.

It’s too bad, because Eve’s partner in adolescent angst turns in a solid performance. Olly Alexander’s James is exactly the kind of awkward, sensitive teen who you would root for in a coming-of-age movie, and his performance as a sensitive, endearing young man is consistent throughout the film.

Murdoch and Belle and Sebastian are often dismissed as wimps, but if anything God Help the Girl isn’t wimpy enough, at least not where it counts. The film opens with Eve escaping from a mental institution, but it launches immediately into one of her coy vocal performances, so I don’t believe for a minute that this is a woman who hasn’t already come of age, found her voice, and talked a sensitive singer-songwriter into hiring her to star in his movie. The central crisis of a coming-of-age movie should be the awkward journey at the end of which its protagonist finds their voice. That Eve struggles to find her musical voice as well should make the film that much more moving. At their wimpy best, Belle and Sebastian were unassuming indie rockers, even when they paid homage to Thin Lizzy. God Help the Girl turns their sensitive aesthetic into everything that twee-haters warn you about. God help the moviegoer.

Much of Mirage Mirage has a sunny feel, but there’s a somber undercurrent. …