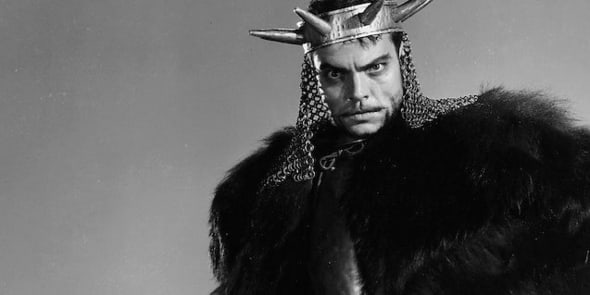 In the context of Orson Welles’ career, Macbeth is hardly as surprising or unorthodox as contemporary reviews received it. Welles’ Mercury days were typified by heavily restructured, stylistically idiosyncratic Shakespeare productions, most notably his fascistic rendition of Julius Caesar. In fact, one of the director’s earliest successes, preceding even his triumphs with Mercury, was an all-black production of the Scottish Play set in 19th-century Haiti, complete with voodoo references replacing medieval witchcraft.

A hint of that production hangs over the introduction of this more faithful film version, which begins, as does the text, with the witches chanting over their boiling cauldron. From that brew, however, the Weird Sisters pull out clay that they shape into a facsimile of Macbeth, and occasional shots of that figurine throughout the film reflect the inner and outer decay of the ambitious ruler. It’s an eerie image to start the film, albeit one that vividly captures the sheer, black energy of the text, avoiding gore but nonetheless communicating what a thoroughly nasty play it truly is.

Stylistically, Macbeth applies Expressionistic aesthetics to classically theatrical décor. Welles’ sets are stripped to the point of minimalism, with locations reduced to the dimly lit steps of castle walls, craggy outgrowths, or soupy patches of swampland. Half-tamed stone and muddy earth are set against voids of shadow. Welles’ usual, high-contrast cinematography is perfectly suited for the play’s stark morality; even the bright light that offsets the inky blacks lacks any sense of hopeful illumination, rather acting more like a searchlight identifying slinking criminals. 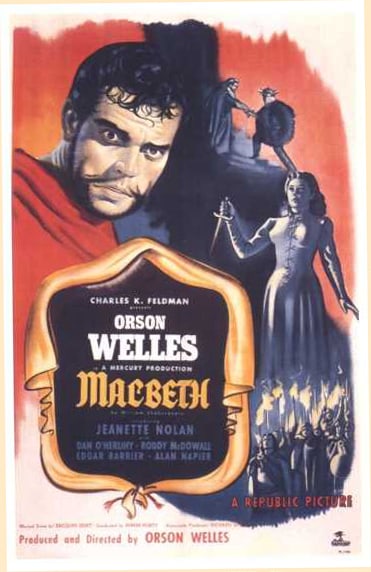 In practice, Welles’ archly theatrical rendition suggests the brutality that Roman Polanski would bring to his own version nearly three decades later. Naturally, Welles’ film lacks explicit violence thanks to the censorship of the era —and, in a crystalline display of the Hays Office’s absurdity, even some of Shakespeare’s centuries-old text had to be culled for being too risqué for 1948. Nonetheless, this is a violent film that is all the more powerful for its suggestion: the Cawdor execution scene is gorgeously, terrifyingly played out through careful match-editing and shadows, with the silhouettes of drummers towering over a shot of assembled soldiers, then the swing of the executioner’s ax spliced to the final fall of a mallet onto a drum skin. Likewise, the murder of Macduff’s wife and son is utterly savage, with the woman and child emitting almost animalistic shrieks as close-ups of guard’s unfeeling faces as they thrust knives into flesh.

The acting, too, blends faithful theatrical expression and realist savagery. The cast speaks in Scottish brogue that initially gives the dialogue an almost fatal lilt, inviting the mockery of those who never say a word when the actors in various Italy-set Shakespeare productions speak with English accents. As Welles’ Macbeth sinks deeper into his ambition and greed, however, the force of Welles’ baritone voice imbues his burrs with added fury, and the rest of the cast also settles into their voices as the film gets darker. It’s especially interesting to watch the cast play into Welles’ staging of the material; when Lady Macbeth (Jeanette Nolan) receives word of the witches’ prophecy and of Macbeth’s elevation to Thane of Cawdor, her “unsex me” monologue is matched with decidedly un-unsexed motions while lying in bed, a faint pre-coital tremor of anticipation of her husband’s promotion and added power. Welles films himself in isolation, even when Macbeth stands among others. In one particularly striking shot as Macbeth prepares for an English assault, he stands on a bare stone plateau with his men, who are mostly obscured out of frame, while the handful who do make it into the top-left corner are thoroughly distanced by both blocking and the camera’s focal length so that it seems as if Macbeth were standing half a mile away from his fading numbers of loyal followers. This distance compounds Macbeth’s regal authority, but it also enhances the desperation in Welles’ voice, of a mad king who cannot see that he has fewer and fewer subjects willing to heed his call.

A relatively minor aspect of the film’s interpretation, that of the collision of pagan and Christian religions, nonetheless pervades the atmosphere. Those close-ups of the gruesome clay voodoo doll are contrasted with Celtic crosses made with long, perilously thin sticks, so feeble that they all look as if they might snap under their own weight. Yet this is a spiritual battle among a people who seem to have no spirits at all. In this version of Macbeth, the appearance of Banquo’s ghost is almost a relief: even if it’s a figment of Macbeth’s fevered, guilty imagination, at least it suggests the possibility of an afterlife beyond this horrid, filthy and cutthroat mortal world. Macbeth has always lent itself to vicious adaptations, and Welles’ version can sit comfortably beside Polanski’s and Kurosawa’s as one of the most stylish, and most horrifying.