January 26, 2021
Home Music Hamish Kilgour: All of It and Nothing 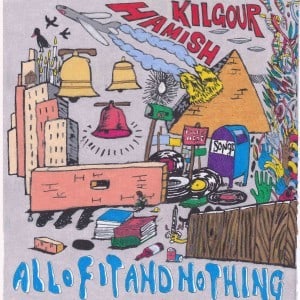 [xrr rating=4.0/5]When the drummer gets to make his own album, listeners tend, with rare exceptions, to hesitate. One recalls Peter Criss, Keith Moon, and of course Phil Collins, for better or worse. But, the results need not always be so dire. Indie-rock drummers, more than arena rock bands, tend not to have their percussionists step forward, so when one from a revered band which started in 1978 does, you notice.

Hamish Kilgour’s brother, guitarist David, founded the Clean back then. Now he plays not only with that band but with the Heavy Eights, while longtime bassist Robert Smith went on to sing with the Bats. Hamish also teamed up, when he moved to New York City, with Lisa Siegel as the Mad Scene. Another member of that band, on guitar, is Georgia Hubley, drummer for Yo La Tengo, and that band in turn has championed many of the New Zealand indie bands founded back then, yet at it now. Bands often flip instruments, lineups and approaches, but they sustain a love of crafted, quirky, indie rock.

Recorded with sometime Mad Scene member Gary Olson at his studio, Kilgour, now a New York resident, provides a stripped-down solo album All of It and Nothing, at first resembling demos rather than finished product. However, the lo-fi aesthetic of his band and their milieu assures that songs are not rough drafts, sketchy as they may be, but meant to sound just as they are, if often simply adorned and rendered.

For instance, “Going Out” features subtle percussion, as vibrations and resonance enhance the tune under the acoustic guitar and the closely-miked vocals. Kilgour in the Clean to the best of my knowledge tended to keep drumming rather than as stand out as front man. His voice keeps a casual tone unsurprising for his place in the lineup. He sings as if to himself, rather than croon or project his deep tones, and this delivery attests to the feeling of this album as DIY labor of love, for himself.

With a more prominent drum sound, “Strength of an Aye” approaches the propulsive quality that energized the Clean. It’s strange as this seems to upend the guitar-driven pace of that band’s more frenzied records. Here, it places the drums at the front, and arranges percussion behind it, with guitar and bass more submerged as the rhythm section. It makes me wonder what rock music would sound like if drummers stood out from their usual place in the line-up. (Phil Collins notwithstanding.)

The jangle and tambourine of “Crazy Radiance” recall XTC at their peak on a summer pastoral song. Once again, the percussion is nimbly used as backing, similar to a kettledrum in an orchestra, which creates a homespun grandeur to a bare-bones presentation of a confession of a singer’s sorry heart. “Smile” circles around a celebration of a woman rather than a lament to her, but it finds a happy midpoint between a subdued and a swaggering attitude. “Hullaballoo” resembles his brother David’s more tense and dour lyrics, under more insistent chords. These strummed songs would work well on a small stage. So, the demo-like nature of their production by Olson makes you feel their intimacy.

More amplified tunes also appear. “HK Eleven Eight” shamble along with a more fully realized production. The unsteady psychedelic hints of the Clean return and the effects through which electric guitar is filtered add to the dazed appeal of this shuffle. Kilgour’s vocals fade as the feedback rises.

Feedback into “Turn Around” as tambourine and guitar balance on Kilgour’s ascending riff and descending vocal, all done without undue attention, let the listener into what feels very near to the ear. Olson’s production sprinkles in effects rather than drowns the songs in them, and the album benefits from such restraint. As with an experienced cook, Olson supervises Kilgour’s creations; he knows when to let them simmer on their own and when to blend them with the deftly placed garnish.

Keyboards drown voices barely audible at the start of “Rave Up (for the Yellow Dogs)” as percussion shimmers, in a jazzier style. I prefer jangle to groove and tinkle, so this for me went on a bit too long. But it’s not that bad, still. A couple of other songs chug along well enough, and the album as a whole conveys satisfaction.

As an admirer of many New Zealand bands who began 30-odd years ago, I wondered what the Clean’s drummer would sound like on his own, as the only vocalist. Given the chance at last, the results, as with so many of his nation’s songs, prove winningly if roughly delivered. They should satisfy not only fans of New Zealand indie rock but any curious listener who may relish tunefully played, inventive songs with unexpected touches. When this drummer gets to release 11 songs as a guitarist and vocalist, you sense the pride he takes in these quietly assembled songs emerging, after all these decades behind the indie-rock kit. This step forward belies its title, All of It and Nothing.