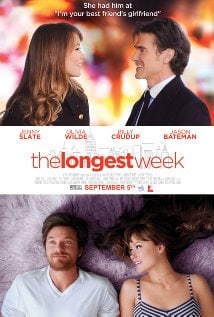 [xrr rating=2.0/5]Wes Anderson is so popular, it’s surprising that more directors don’t knock-off his style. Perhaps filmmakers realize that unskillfully combining wry voice-over narration, eccentric man-children and highly structured compositions would grate on the nerves of Anderson’s fans and detractors alike. And judging by Peter Glanz’s The Longest Week, a glorified film school exercise in mimicry, that holds true. Glanz appropriates all of Anderson’s hallmarks except his trademark lateral camera pan. Combined with a New York setting of an indeterminate era and yuppie dialogue within one constricted frame after another, the result is a film that his audience may want to enjoy, but won’t be able to stomach.

The Longest Week unfolds over a prolonged seven days, and tells the story of spoiled rich man-child Conrad Valmont (Jason Bateman), whose parents suddenly cut off his bankroll, forcing him to vacate his suite at the Hotel Valmont. Conrad has never truly worked in his life, unless you consider his first, ill-received novel The Directionless Generation work. He tells people he is in the “gathering stages” of writing his second novel. Desperate for a place to stay, Conrad turns to his artist friend Dylan (Billy Crudup) and immediately proceeds to steal his model girlfriend Beatrice (Olivia Wilde). Despite Conrad’s recognition that “the girls that I like as human beings I’m not sexually attracted to, and the ones that I am sexually attracted to I don’t particularly like as human beings,” Beatrice is his ideal woman for this whirlwind week, and the majority of the film is montage after montage of their deepening relationship.

Much of the desperately cloying dialogue consists of questions like “Could you ever see me as the struggling bohemian artist type, hypothetically speaking of course?” Characters are introduced with painfully droll monikers like “anti-social socialist” and “closet conversationalist.” Glanz is desperate to write clever, endlessly quotable lines along the lines of Anderson, Woody Allen or even Whit Stillman, but the fervor of his desire only guarantees that his lines will evoke silence, if not pained sighs.

When the insipid banter between this trio dies down, Glanz relies on narration provided by Larry Pine (a Wes Anderson alum, no less) for exposition. For the most part, the narration insists to viewers just how eccentric and witty these characters are (Beatrice loves when Conrad uses words like “haberdashery”), but occasionally, it undermines them, a confusing contradiction. Halfway through a date with Beatrice, the narrator states that “Conrad’s pseudo-intellectual banter was wearing thin,” as if the audience were unaware of that sad fact. Most disturbing is a closing scene in which Conrad rolls out his second novel about the events of this film. An interviewer asks for his reaction to accusations that his work is derivative of F. Scott Fitzgerald and Edith Wharton. Conrad merely answers, “Thank you.” If Glanz holds the same position when it comes to the criticism of his film, he clearly doesn’t understand the difference between grating unoriginality and respectful homage.

The sheer volume of visual references to classically neurotic filmmakers is what differentiates Glanz’s film from mere homage. The chapter title-style introducing each day of the week, meticulous production design and camerawork, Conrad’s use of tape recorders (à la Allen’s Manhattan) and incessant tinny jazz music and French pop songs show a filmmaker populating his film with a checklist. The result is understandably lacking in any emotional depth or connection with the characters. Bateman, Wilde and Crudup, along with most working actors, would love to have the opportunity to work with the directors who influence Glanz, but in lieu of an offer from the originals, it’s not surprising that they agreed to an elaborate rehearsal in The Longest Week.