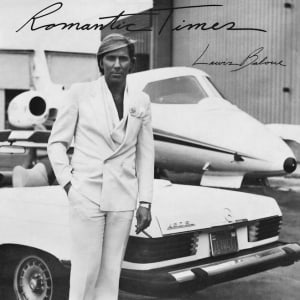 [xrr rating=4.0/5]Originally released in 1983, Lewis’ private press album L’Amour featured a stark black and white cover portrait that suggested a California Jandek. His music was a very personal and sometimes incomprehensible vision of El Lay soft pop. L’Amour was one of Light in the Attic’s most intriguing releases of private press pop, but label producers were unable to find the presumably reclusive auteur in two and a half years of trying.

This summer, a refined section of the music world buzzed about an eBay auction of a second Lewis album that eventually went for $1,825.00. To the chagrin of one deep-pocketed buyer, Light in the Attic soon countered with news that a reissue of Romantic Times, originally released in 1985, was already in the works. Some listeners have suspected that Lewis was a self-conscious hoax, too strange to not be the work of a mischievous 21st century musical trickster. But copyright records from the early ‘80s confirm that these records definitely were from their era, if totally apart from them.

L’Amour was a strange, ethereal pop record. But Romantic Times, credited this time to Lewis Baloue, is even stranger. The smooth singer is pictured on the cover surrounded by the trappings of success: a Mercedes Benz and a private jet. This is the persona of the ladies’ man as an independently wealthy playboy, but the music inside that cover sounds nothing like you’d expect.

Romantic Times seems to be meant as the musical prelude to a romantic evening, but it is instead the stuff of fascinating nightmares. The instrumentation is more lush than on L’Amour, electronic drumbeats providing a strangely awkward backdrop for synth lines and a warbling voice that sounds even more fragile than on the debut. “We Danced All Night” sounds like an arrangement of “Strangers in the Night” made for a very personal horror movie. He ends nearly every vocal phrase in “Don’t Stop It Now” with an affected vibrato that would drive me crazy if I heard it on “American Idol,” but his vocal affectations are so unusual that even though he calls the record Romantic Times, his idea of romance is so unromantic and creepy that it’s a subversion of the very pop music he strains for.

Lewis croons like an alien lounge singer, his unmistakable quiver one of the most unusual voices in the strange canon of private press pop. “It’s a New Day” is almost all affectation, the singer lost in his own unmodulated shakiness. If Michael McDonald’s signature sound comes from straining to hit the highest notes of his deep range, then Lewis, who sounds like a natural baritone, distorts his voice by reaching for the stars.

Lewis sings love songs from his heart, and with great feeling. It’s an eerie feeling, one that’s romantic but not likely to seduce anyone into bed. Lewis’ music is a romantic dream of the singular artist operating on the fringes of pop culture, embracing convention and brilliantly subverting it at the same time. The private press record industry was full of records made for an audience of dozens, but Lewis sounds like he’s completely in his own hermetically sealed world, his inspiration ostensibly taken from synth pop and soft rock and romantic crooners, from Bryan Ferry and Casio. But his is a most peculiar pop music. His music reminds me of the late wildlife activist Timothy Treadwell, subject of Werner Herzog’s documentary Grizzly Man. Treadwell’s monologues, videotaped in the wilds of Alaska, suggested the kind of private shows a child would put on in their bedroom for an imaginary audience.

This summer, after two and a half years of searching, Light in the Attic finally tracked down Randall Wulff, the enigmatic man behind L’Amour and Romantic Times. When the label’s producers saw him, Wulff was calmly sitting on the patio at his neighborhood cafe, surprised that anybody was looking for him at all. Light in the Attic came prepared with product and royalty checks, but he politely declined, gently asserting that he had moved beyond that music – and had been writing new music. It’s encouraging to hear that Randall Wulff still writes music, and that 30 years later, the music world is finally catching up to his work. What could his new music possibly sound like? I hope we won’t have to wait 30 years to find out.