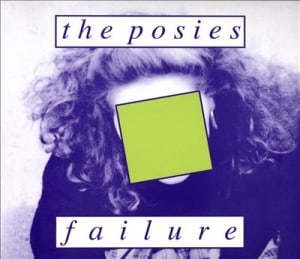 [xrr rating=4.5/5]Few people on the alt-rock scene who got turned on to the Posies in 1993 after the one-two punch of Dear 23 and Frosting On The Beater ever got a chance to hear where it all started. Aside from a handful of fans and some astute ears at Geffen Records, hardly anyone heard Failure upon its debut in 1988, and some of those who did never actually heard the whole thing. Even after it was given an official release after its initial cassette run, Failure felt like something of a secret, an obsessive’s litmus test along the lines of one of the band’s biggest inspirations, Big Star. And like those Big Star albums, Failure is a wonderfully-crafted collection of fractured power-pop that deserves a bigger audience than the one it has.

Failure is a jarring listen for those with a mere passing familiarity with The Posies’ more popular work, and it’s not just because of the more modest production. The band’s roots have always been in the sort of sweet, shiny pop of the Sixties, something that producers John Leckie and Don Fleming hid under crunching guitars. Failure offers no such disguises; this record is all jangle, with Jon Auer and Ken Stringfellow’s voices placed front and center in the mix. The band’s other big influences are also more apparent here: on “Blind Eyes Open,” the band take their shot at the sort of fraught New Wave tension of early XTC and Squeeze, and, while it’s a fairly direct imitation, the vocal performances help the song rise above pastiche. Indeed, the Posies’ influences are all apparent on Failure, but from the start, Auer and Stringfellow were skilled enough to synthesize those separate roots into something eminently listenable.

Although Failure came out in 1988, it’s still striking just how mature The Posies were as songwriters. At their young age, it would’ve been expected that their first album would consist of relatively immature takes on love and relationships, but they did so much more than that. Songs like “I May Hate You Sometimes,” and “At Least For Now” demonstrate a skill beyond their years in such a natural way as to make other, more experienced songwriters a little jealous. Auer and Stringfellow’s songs defy their lack of experience with an emotional depth that matches their cleverness. This elevates the band’s work in a way that earlier power-pop groups like Shoes or even Badfinger could rarely match. The Posies were already well-versed in brainy pop-rock, but Failure showed just how good they were at making that sort of music themselves.

The Omnivore reissue of Failure comes with a collection of extra material, much of which were last heard on the out-of-print Houston Party Records re-release of the album. Most of the bonus tracks are demos that show some of the album’s songs in their formative stages. Three of these songs, all of which come from Stringfellow’s earliest demos for Failure, betray the band’s Sixties influences considerably; “I May Hate You Sometimes” sounds like a lost Kinks song in this format. The instrumental tunes don’t add much to proceedings, although “Allison Hubbard” is a fun little number. As a peek into the recording process for the album, though. these tracks do a lot to showcase just how brilliant Failure is.

Simply put, Failure is one of the real lost masterpieces of its genre; it’s an album that every fan of power-pop should try to listen to at least once in their lifetime. Plenty of artists have made albums as clever as this, but few could match the Posies’ emotional nuance. Far from being a relic of its time, the album’s infectious melodies are lasting and well worth the multiple listens it deserves.