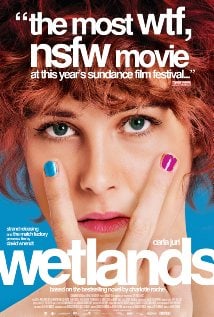 [xrr rating=2.0/5]David Wnendt’s shamelessly vulgar, occasionally sweet coming-of-age comedy Wetlands begins with onscreen text written by an angry reader of the film’s source material, Charlotte Roche’s German-language bestseller of the same name. “This book shouldn’t be read or adapted to a film,” the reader implores, citing the book’s explicit sexuality and overall affront on conventional taste. “We need God.” God is found in Wetlands, but only at the expense of jolly fetishist Helen (Carla Juri), who loves mocking the good Lord above almost as much as she enjoys subjecting her lady parts to disgusting surfaces. Indeed, the film begins with her rubbing her crotch on a filthy, jizz-covered toilet seat she finds in a dank, disgusting public bathroom, and that’s not her only kink—Helen also enjoys using phallic vegetables as sex toys and collecting semen samples from her various suitors. Shaving, however, isn’t her strong suit: while quickly maneuvering a razor over her undercarriage—“My ass is part of my sexual equipment and thus subject to modern shaving trends”—she nicks a hemorrhoid (something she’s proud to have) and gives herself an anal fissure.

She undergoes surgery during her resultant hospital stay, and while recuperating, begins to fall for—or rather, lust after—one of her nurses (Christoph Letkowski), regaling him with stories of her sexual expeditions when not outright seducing him. He’s transfixed, of course, to the point that he doesn’t mind helping cleaning her off after she shits the bed, incontinence being a side effect of the rectal surgery. It’s pretty rough stuff, the kind that seemingly belongs in a far more exploitative film, but the bubbly tone and underlying charm that endeared the book to so many readers quickly kicks into gear, resulting in perhaps the sweetest comedy about anal fissures and auto-erotic vegetarianism ever.

Aside from Helen’s sexual preferences and bodily functions, we’re also introduced to her divorced parents (Axel Milberg and Meret Becker) and best friend Corinna (Marlen Kruse), each of whom are broadly drawn personality types without any real depth. But if the surrounding cast lacks complexity (you can throw the hunky nurse alongside the parents and the BFF), Helen is that much more fascinating. In an energetic, screen-dominating performance, Juri exudes confidence in even the most compromising positions, perfectly exemplifying Helen’s devil-may-care attitude as well as her hidden sadness.

Somewhere along the line, though, the filmmakers decided it wise to double down on the film’s brazen perversity. As a protagonist, Helen is nothing less than a force, but the film stumbles mightily during errant attempts to psychoanalyze her. Filmed with a hyperactive, music-video style, Wetlands is annoyingly flashy, indulging in digressive fantasy and flashback sequences that illustrate Helen’s inner-thoughts and attempt to explain her unconventional sexual habits, which are apparently owed to an emotionally turbulent childhood. The film makes the incredibly wise point to never shame Helen for being such a perv, but the fact she doesn’t simply own her fetishes represents a parochial view of sexuality in general and female sexuality in particular, and this is especially discouraging considering some elements of the film take a much more progressive stance on the subject—a scene in which Helen and Corinna swap tampons mid-cycle is a simultaneously disgusting and profound symbol of internet-age feminism. When the story builds to a surprisingly tepid denouement, the shock value’s inherent gimmickry becomes even more pronounced, as do some benignly didactic themes usually found in young adult literature. Ultimately, Wetlands cops out, amounting to little more than a NC-17-rated Disney Channel original movie.