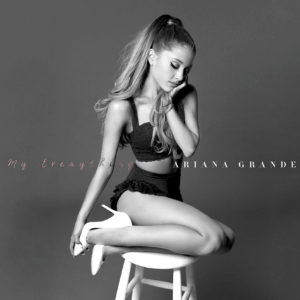 [xrr rating=2.0/5]Conventional wisdom holds that the third time is the charm, but major-label pop operates under a different code. When there’s money in the pool, risk is harder to justify, so the first time must quite necessarily be the charm. If it’s not, there’s almost never a second time, so former teen actress Ariana Grande is a rare thing: when her opening bid for the charts, 2011’s mediocre “Put Your Hearts Up,” didn’t detonate, the singer’s debut LP languished in development hell until late 2013, when it surfaced at last as the bland, likable-not-loveable Yours Truly – and promptly fell on deaf ears. Why didn’t Universal Republic show her the door right then? Probably had something to do with Grande’s voice, which boasts the sweeping range and smoky bite of a young Mariah Carey cut with a lash-batting appeal at once coquettish and Disney-pristine. On Yours Truly, the deliriously energetic, bubbly Grande met every track handed to her by her generic songwriting team head-on and tore it to pieces; no matter how boring the hook, she found about six different angles to attack it from. Her surplus of talent was plainly obvious. Trapped within pedestrian material, she was a nascent star reduced to stylishly bouncing off the walls.

Is sophomore album My Everything “the charm”? By some criteria, that’s a resounding “YES”: Grande’s just about everywhere one looks these days, her brand-ready visual identity (high boots, tiny outfits, high ponytails) plastered all over MTV as she tops the charts with her own work (“Problem,” “Break Free”) and as a guest on Jessie J’s star-powered juggernaut “Bang Bang.” Anyone who pays attention to pop now knows who Grande is, which means she’s probably here to stay. That’s largely occurred on the strength of the Max Martin-produced Iggy Azalea collaboration “Problem,” and it’s a song that can easily shoulder the weight of Grande’s new fame: a squawking sax loop that dares its direct predecessor in Le1f’s “Wut” to play catch-up; a towering pre-chorus that allows Ariana to show off her vocal assets; a bona fide booty-dropper of a refrain par excellence. A friend of mine complained that it “isn’t really [Grande’s] song,” and that’s true – she’s eclipsed by the inexplicable but undeniable popularity of Azalea and silenced altogether on the most recognizable portion of the song, and the very awkward live presentation of “Problem” is accordingly heavy on choreography. But it’s a ubiquitous smash and it’s got Grande’s name on it. It put her on her target audience’s radar in a way her earlier work failed to do, and then she cemented her presence in the zeitgeist with the Zedd-produced, post-Robyn EDM stomper “Break Free,” another very fine single. She caught our attention and held it.

Both of those singles encourage dancing, both are about summoning the self-respect to leave a worthless jerk behind, and Grande completely sells both vocals. Despite this, these songs sound so different from one another that to feature them on an album would require extraordinary feats of contextualization. Unfortunately, that’s not how sure-to-be-a-hit pop records function. The sense one gets hearing “Problem” and “Break Free” back to back is a fitting characterization of My Everything’s overall issue. In what is more or less a repetition of the structural flaws that made Yours Truly so ineffectual, My Everything hits all the expected beats out of a sense of obligation; the album consists mostly of check marks in all of pop’s of-the-moment boxes. Zedd-produced banger? Check. Iggy Azalea blockbuster featuring Grande? Check. Duet with the Weeknd (“Love Me Harder”)? Check. Nostalgic, slinky. hip-hop-indebted club number with guest rap verses (“Break Your Heart Right Back,” “Best Mistake,” “Hands on Me”)? Three (!) checks. Overwrought, weepy ballads (“Just a Little Bit of Your Heart,” “My Everything”)? ‘90s throwback (the teeny-bopper girl-group-isms of “Be My Baby”)? You bet. A sense of cohesion or a coherent perspective? Not a chance – and the quality of the songs is as all over the place as the styles they’re dolled up in.

It’s Grande who loses out most of all in this situation. Some of her vocal work is just astonishing – “Why Try” is overwritten tripe, but that cyclical melisma punctuating every refrain will stop you in your tracks, and the moody, low-key “Best Mistake” boldly plays against type to great effect in spite of an awful Big Sean verse – but the stylistic hopscotch designed to propel the singer to pop-cultural omnipresence costs her a distinct persona. On Yours Truly, her talent was apparent but stifled; on My Everything, it’s given the space it needs and turns out to be largely technical. The opportunism that undergirds the aesthetic decisions throughout the record turns Grande into a figure not unlike her (significantly less compelling) recent collaborator Jessie J: someone groomed for massive success on a song-by-song level with no thought given to creating a sustainable narrative, a presentable but highly malleable cypher. The emotion that wracks one performance is wiped away as soon as the next song starts. There’s no reason that the woman who sings “Just a Little Bit of Your Heart” can’t be the same one who sings “Hands on Me” and “My Everything,” but aside from the moneymaking potential both songs offer, there’s also no logical reason why she should. It’s a gap that plagues many full-lengths in this genre, and although the always-appealing Grande sings her heart out, she can’t quite fill it.