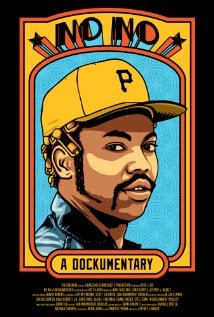 [xrr rating=3.0/5]Even if you aren’t a baseball fan, there is a good chance you’ve heard of Dock Ellis, the Pittsburgh Pirates player who pitched a no-hitter after taking LSD. But even if you’ve seen the brief animated video floating about on the web about the event or heard Robin Williams’ routine about it, No No: A Dockumentary proves there was much more to the flamboyant player than that historic game.

Ellis played for that exciting Pirates squad in the late ‘60s and early ‘70s that also featured Roberto Clemente and Willie Stargell, just one of the many outsized personalities that made the team so exciting. When we first meet Ellis in the film, he is already sparring with team management for wearing colorful hair curlers when he takes the mound. But the film is more than a loose collection of stories leading up to one big game. Instead, it tells the story of a man who lost himself in drugs before eventually recovering and helping other addicts.

According to the numerous players interviewed for the film, drugs were everywhere in baseball during the late ‘60s and early ‘70s. The grueling 162 game schedule just seemed impossible otherwise. For most, the drug of choice was speed, called “greenies” by the players. According to one interviewee, up to 90% of the league was under the influence in those heady years. Ellis claims he was drugged up during every single one of his pitching appearances.

And it makes sense. Ellis was one of those players with an outsized personality, the film makes clear from the get-go. Although Jackie Robinson blazed the way for African-American players two decades before, Major League Baseball still wasn’t an entirely integrated experience. Ellis and his teammates broke down barriers and even fielded, at one point, the first team where all nine of its starting players were either black or Hispanic. Historically speaking, America was ready for outsized personalities like Ellis and Muhammad Ali, especially with black Americans finally entering popular culture with soul and disco music and television shows featuring all black casts.

At first, Ellis thought he had a handle on the drugs. The early sections of No No feature events where Ellis, who passed away in 2008, and his friends recall their misadventures with fondness. However, that magical team unraveled following the untimely death of Clemente, sending Ellis into an uncontrollable spiral of drinking and drugs. He beat his first wife and bounced from team to team, finding himself in hot water with management for refusing to play by the rules. When an opponent irritated him, he simply beaned them during their next at-bat.
No No, though obviously crafted with non-baseball fans in mind, will most likely hit a home run with those who love the game. Director Jeffrey Radice interviews a wide selection of former Pirates and even had the opportunity to include some Q+A with Ellis himself. However, those expecting a big treatise about Ellis’ acid-soaked masterpiece will be disappointed, especially as the film skimps on the man’s life after he retires from the game and recovers from his addictions.

Featuring a fun score by Adam Horovitz, No No can be quite rollicking for a documentary but doesn’t stray too much from the talking head format that is now the norm. Some of Radice’s choices of footage are questionable, but the film comes at the right time. I wanted nothing more than to grab a hot dog and six-pack and watch the boys of summer of today continue the magical tradition of which Dock Ellis is a part.