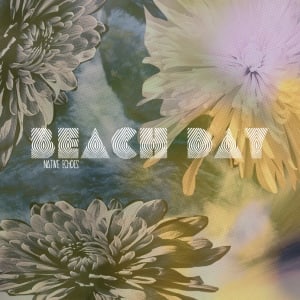 [xrr rating=2.75/5]Few band names can so concisely convey their sound as Beach Day. The duo from Hollywood, Florida has a trademark ‘60s surf pop that began with debut album Trip Trap Attack and continues into their sophomore effort Native Echoes. Their particular brand of indie-rock is all retro guitars and beach vacation vibes. Thanks to the success of Trip Trap Attack, their latest album features crisp production and streamlined instrumentals. The overall result is overwhelmingly listenable but far from being inspired.

Vocalist and guitarist Kimmy Drake and drummer Skylar Black are the two remaining members since the departure of bassist Natalie Smallish after the release of Trip Trap Attack. That is not the only change for the sun-bleached band, however. Going into Native Echoes, the duo shifted focus from purely fun-fueled surfy grooves and incorporated a grittier, grungier aspect to their sound. Part of that stems from the fact that Beach Day enlisted the help of producer Jim Diamond – best known for his work on the first two albums by the White Stripes. As a result, Beach Day’s guitars are chunkier, and Drake’s vocal even incorporates more soul into the mix.

While their debut featured songs predominantly focused on love, heartache and breakups, Native Echoes continues in that generic pop vein. Opener “All My Friends Were Punks” is an upbeat hand-clapper, and to complement the punk friends, Beach Day offers the first glimpse of their fuzzed out guitars and distortion. The added grit, however, does not subvert or detract from the overall exuberance. The duo experiment with feedback and crunchy electronics on tracks “Don’t Call Me on the Phone,” “BFFs” and “Pretty.” The entire first half of the album is devoted to these surf jams. Unfortunately, most of these tracks fall victim to dull or even meaningless lyrics. “I’m Just Messing Around” is two minutes of “I’m just messin’ around and I like it/ I’m just drivin’ around and I like it” ad infinitum. And no part of the instrumentation makes up for that lyrical laziness.

But there are outliers that don’t fall into the simple surf pop category or embrace their new grungier sound. “Gnarly Waves,” in particular, serves more as an instrumental interlude and captures an atmospheric sound much better than other songs. Slower tracks exhibit somewhat better songwriting. “The Lucky One” and “Lost Girl” are somber and present ideal displays of Drake’s vocal control. The latter features a marching drum backing that certainly adds to the nostalgia-tinged tale of “fair-weather friends.” “Fades Away” prominently features that droning ‘60s synth keyboard sound alongside Drake’s layered vocal. Meanwhile, highlight “How Do You Sleep at Night” is stripped down to the bare essentials: an ethereal chorus from Drake, acoustic guitar and the sounds of crashing Florida waves.

Undoubtedly, those tracks that will be pushed more heavily and seen as more appealing are the grunge-fueled jams littering the top half of the album. Riddled with ridiculous references to “punks,” those songs fail to show a Beach Day worth recommending let alone listening to. There is a silver lining, though. Once the band moves beyond their trite surf pop, Drake and Black open themselves up to an indie pop that still bears noticeable influence from ‘60s pop but explores new ground with moody instrumentation. The overall result isn’t stellar, but it’s too soon to write Beach Day off completely.