August 07, 2020
Home Features From the Vaults of Streaming Hell: Madhouse 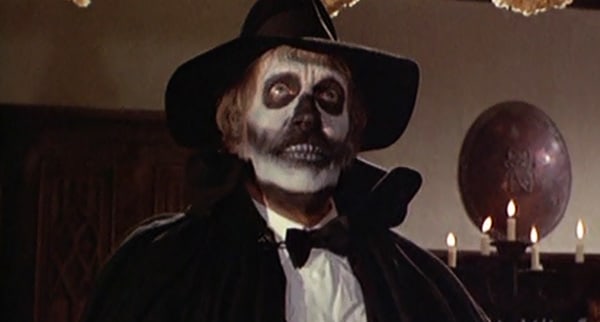 By the 1960s, Vincent Price’s career was at a crossroads of gothic horror and schlock. Price resonated in a cycle of Edgar Allan Poe adaptations, among the few Roger Corman movies out of the American International Pictures (AIP) assembly line that actually earned critical acclaim. But Price also routinely popped up in low-budget AIP B-movies such as War-Gods of the Deep and Dr. Goldfoot and the Bikini Machine. His films were over-the-top to the point of blurring the line between earnest attempts at horror/sci-fi and outright camp. After all, the distinctively voiced actor once had a voiceover part in 1948’s Abbott and Costello Meet Frankenstein.

So it’s appropriate that by 1974, Price skewered himself in AIP’s Madhouse, a self-referential horror flick full of cobwebs, swords, skull masks, tarantulas, capes and contrived murder. Price plays has-been horror actor Paul Toombes (get it?), whose booming career as the skull-faced Dr. Death was cut short. After learning at a dinner party that his fiancée/assistant started her career in adult films, Toombes approaches her in a dressing room to apologize for his burst of self-righteous anger, only to see her blonde head topple onto the vanity. How the murderer (seen earlier wearing a cheesy skull mask and Dr. Death hat and cape) managed to decapitate her and pose her corpse so bloodlessly remains a trade secret.

The shock sends Toombes to the nuthouse (and gives us a close-up down Price’s throat). The bulk of Madhouse deals with his subsequent attempt to resurrect his career with a Dr. Death television series, prompted in part by the goading of the villainous character’s creator, writer Herbert Flay (Peter Cushing). The rare opportunity to see Price and Cushing share significant screen time is sadly one of the few legitimate reasons to watch this film. Toombes’ comeback is hampered by a series of murders that mirror famous scenes in the Dr. Death films, in which vixens meet their demises with a pitchfork through the neck or hanged by their own hair. Toombes is fingered for the crimes, and his tenuous grasp on sanity causes him to question whether Dr. Death has sprung to life from within the dark recesses of his own psyche. 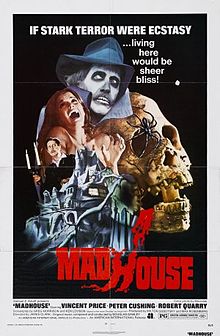 Amidst this rather labored murder mystery is a side plot with Flay’s wife and Toombes’ former co-star/ love interest Faye (Adrienne Corri), whose beauty was destroyed by burns sustained in an assault. She’s reduced to living in the basement of Flay’s mansion, doing little more than tending to a large tank of tarantulas that she ridiculously refers to as her “babies.” Toombes spends much of the remainder of the film in skull-face greasepaint hobnobbing at after-parties while the masked killer, who may or may not be Toombes, dispatches one victim after another in a succession of heavy-handed methods.

You don’t watch such a silly horror film for plot, so it’s no spoiler to explain that Toombes was framed out of jealousy, which Peter Cushing details in an exposition-heavy climax. Madhouse is sloppy in its execution, but the acting isn’t half-bad, and there’s a comfort in watching Vincent Price slink around spooky corridors holding a glowing candelabra.

Madhouse is meant to be a lark. The film uses scenes from Price’s other AIP films (mostly from the Poe cycle) to stand in for his Dr. Death series. Dr. Death himself recalls a long line of quasi-medical roles for the actor, including The Abominable Dr. Phibes and its sequel. A Scotland Yard official earns one of the film’s only real laughs when, skeptical that an actor would do something crazy, he claims “actors don’t get carried away like that.” Otherwise, much of the humor is of the campy horror variety, and it’s difficult to tell what, if anything, is supposed to be frightening. The title has little to do with the film, and nothing onscreen is grounded in reality. Still, this leads to one of my favorite scenes in the movie, when a kid casts out a fishing line and effortlessly reels in a rowboat containing a corpse. Seen through the deliciously campy lens of B-movie schlock, Price and Cushing make Madhouse pretty damn entertaining.