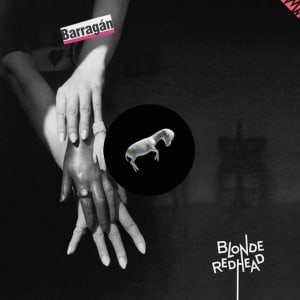 [xrr rating=2.5/5]Blonde Redhead made their name by turning ghostliness into their specialty. Kazu Makino’s equal parts afraid and eerie vocals mixed with the Pace twins’ dynamic yet sleepy instrumentation always ensures a pleasurable séance of sound. It’s these haunting textures which made a record like Misery Is a Butterfly a modern classic. Of course, the success of their spiritualist invocations varies from record to record. For Barragán, the specters aren’t spooking as well as they used to but they’re still in the room.

As far as their discography goes, this may be their most stripped-down and traditional diary entry yet. The first song, title track “Barragán,” lilts its woodwinds in a way which harkens back to Jethro Tull and Led Zeppelin’s “Stairway to Heaven” and, by extension, the pastoral medievalism those bands were copying. It’s followed by “Lady M,” a track which would sound as at home on a Portishead album as it would in an Akira Kurosawa film.

Elements like the stuttering guitar leads on “Cat on Tin Roof” are what made so many people flock to the group in the first place. There may be less synth and keyboard work on here as there has been in the past but it serves to highlight how much power Amedeo Pace can pull out of the simplest guitar work. The nearly nine minute “Mind to Be Had” paces itself well. It can lose the listener’s attention but only by the presence of a pretty poignant distraction. Like on all their other records, a few songs here distort time by filling your dry valley of a day with a lake of sound. When you’re under that kind of water, it can be easy to forget to come up for air.

As a whole though, the lake’s water level is lower than ever before. Most of the songs on here come off as more tired than dreamy. Their greatest strength is ushering us into the dark parts of our subconscious, giving us a taste of dreams and nightmares in our waking hours. But the best you get here are soft, warbling lullabies instead of lucid dreaming. Stack “Penultimo” or “The One I Love” next to their earlier “Elephant Woman” or “Bipolar” (off Misery Is a Butterfly and Fake Can Be Just as Good respectively) and the former work like sleeping pills while the latter sound like full-blown psychedelic experiences. When you know a band can lead you down the rabbit hole, it’s bound to be disappointing when they decide to stay on our side of the looking glass.

Blonde Redhead has gotten in touch with another world before so the occasional mediocrity of Barragán isn’t any cause for serious alarm. Just because the ghosts weren’t writing on the chalkboards as much this time around doesn’t mean they’ll never be back to make the table float. When you hear the arpeggiated swirls on “Defeatist Anthem (Harry and I),” it’s pretty clear they’re still around. Everyone needs to take a lunch break sometime, right?