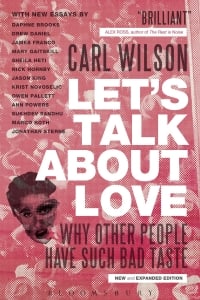 The only Céline Dion performance I willingly listen to is one of her most incongruous. In a duet with Anastacia, a Chicago-born singer-songwriter whose success is largely outside the U.S., Dion performed AC/DC’s “You Shook Me All Night Long” on the 2002 Divas Las Vegas Concert, preserved for digital eternity on YouTube and frequently named one of the worst cover versions in music history. I love Brian Johnson’s original vocal performance, and I love Dion’s version. The schmaltzy Canadian chanteuse is regularly condemned for overwrought performances, but is there such thing as overwrought for this song? AC/DC’s anthemic staple should rock out as hard as humanly possible, and for a singer who cannot rock out to save her life to strain for an elusive ideal somehow rocks out all the harder.

If you’re reading this, you are probably not in Céline Dion’s demographic. Should you think less of me for admitting this qualified love for a performance by such a divisive diva? Would you rather I confess a love for Krautrock instead? Why is that?

Carl Wilson’s 2007 entry in the 33 1/3 library of pocket-sized books about classic albums is one of the most celebrated in the series. The author goes against the critical grain, not because he defends the music of this much-maligned international phenomenon. Wilson spends most of the book putting Dion into social and cultural context that in the end does not win him over to her kind of music. Wilson’s book, unlike most criticism, openly invites dialogue, even providing an email contact for readers to beat their own breasts for and against Céline Dion.

The demographic for a series of books whose subjects include the Kinks, Pavement and Public Enemy may not be the same demographic for a book-length study of Céline Dion’s Grammy-winning conduit for the ubiquitous love theme from Titanic and the adolescent girl crying parties it inspired. But this refined audience is precisely the audience this book needs. Wilson’s subtitle seems to indicate derision for fans of Céline Dion and mass culture successes in general, and he doesn’t pretend to hide his bias, even as he evokes philosophical treatises to spell out the very personal, cultural and class choices that to a large part determine whether we eat up the new series of Can reissues or look forward to the new Taylor Swift album (for the record, I want both). But by the end of the book, Wilson’s thesis, obvious in retrospect, becomes clear. He wonders why music criticism, or criticism of any kind, has to be on a fixed spectrum. “I would be relieved to have fewer debates over who is right or wrong about music, and more that go, ‘Wow, you hate all the music I like and I hate everything you like. What might we make of that?’” How can we respectfully engage with people with whom we profoundly disagree? In matters of taste, why does it seem harder and harder for seemingly opposing camps to get along? How does one turn discord into harmony?

Bloomsbury has reissued Wilson’s 33 1/3rd book in a trade paperback format that misses out on the charms of those charmingly designed mini-tomes. But this expanded edition includes a series of essays that follow up on the authors’ invitation to dialogue. Wilson is in a sense publishing his own reviews, but this is not an echo chamber. Author Mary Gaitskill’s essay finds great fault with Wilson’s assumptions, which seem to come from some indie rock ivory tower. Marco Roth and the editors of n+1 call into question another of his premises in an essay self-evidently called “Too Much Sociology.” There’s even an essay by actor James Franco, who plugged Wilson’s 33 1/3 book on national television, and whose stint on “General Hospital” was partly inspired by the book.

The most personal choice of essayist closes this critical section. At various points in Wilson’s text, he mentions his ex-wife without naming her. His musical tastes are, as they are for so many of us, tied to the history and promise and dissolution of that relationship. Introducing an essay by novelist Sheila Heti, Wilson explains that Heti is his ex-wife. She too wrote about their relationship in her most recent novel, the provocative How Should a Person Be? Heti’s novel was a challenging, anxious work about sex and art and expectations, and Wilson’s non-fiction work treats similar themes, albeit in a less anxious setting. How should one be a critic? How should one listen to music? How should one treat people with whom we don’t agree, or art that doesn’t move us? Wilson finds Dion’s music, by the very nature of its divisiveness, the heart of democracy — “not a limp open-mindedness, but actively grappling with people and things not like me.” If you’re reading this, you may be more like Carl Wilson than not like him. But there are certainly areas where you or I do not overlap with the author. Let’s Talk About Love imagines a world where we can talk about what makes us unique, and still respect and even celebrate those who are different. Even if that means Céline Dion.