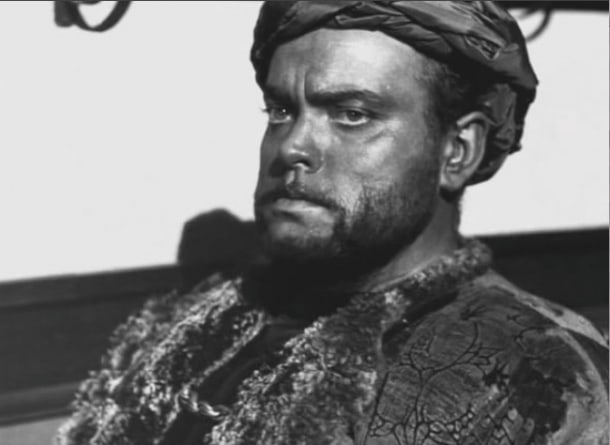 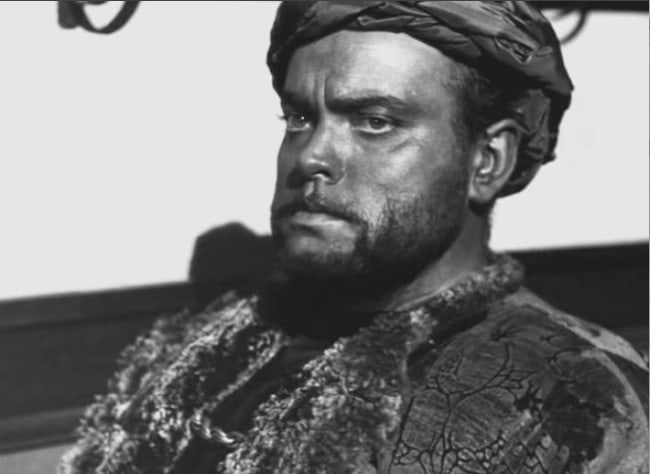 Director Werner Herzog recently told a Brooklyn audience that “facts do not constitute the truth.” His statement suggests a healthy skepticism of mass media, but what of its corollary: does fiction ever show us what is true? Time and again, the films of Orson Welles, overflowing with the deceptive tricks and tools of cinema, say yes. Welles’ troubled career tackled genre exercises and Shakespearean adaptations, often in the service of a truth that can only be found in fiction. Welles’ second adaptation of the Bard in as many films was a much delayed production whose fits and starts belied the difficulty of telling the truth. The personal money he poured into the project was proof of his belief in the truth of fiction, which serves a tale of man being taken down by lies and his own base failings, his jealousy and gullibility, his weakness disguised by strength.

Welles’ insisted that actor Micheál MacLiammóir, who played Iago, publish his diaries of the troubled production in the book Put Money in Thy Purse, whose title comes from one of Iago’s most famous speeches (one that is, ironically, heavily edited in Welles’ script). MacLiammóir recalls in a diary entry from February, 1949, that he hoped to get back from shooting Othello in time to perform in a stage production in Dublin by October. Welles assured his Iago that shooting would be completed by August. The final shooting diaries in Mac Liammóir’s book date from March 1950.

The film’s production problems are the stuff of cinematic legend. A simple scene of Othello and Iago walking along a parapet includes footage shot a year apart. In a pattern that he would repeat throughout his career, Welles took time off from shooting to make money taking on other acting projects. When the money ran out, the director paid for the film out of his own pocket. Then it ran out again. But the resulting movie makes one glad that the film was a struggle, that the director didn’t get everything he wanted when he wanted it. Resistance forced Welles to think harder, money problems led to at least one ingenious solution to a budget deficit that was far more satisfying than a fully-funded shoot would have been. 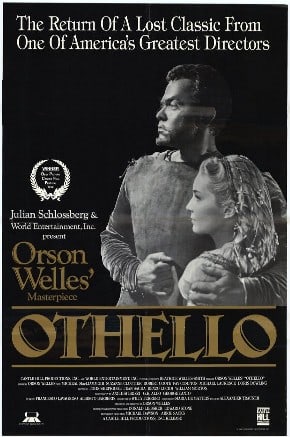 Welles couldn’t get costumes for a crucial scene in which Iago orders Roderigo to murder Casio. Welles had the brilliant idea of stripping down his actors and characters to set the scene in a Turkish bath, revealing his characters for their fragility and vulnerability, revealing costume to be merely disguise, setting up a brilliant rhythm that seals his place as a magician of cinema. What do magicians do? Distract. While Iago sends Roderigo to carry out a foul deed, he also sends a fluffy white dog – visual opposite of the Moor, but in a sense his innocent familiar – to distract the viewer, cutting back and forth from this animal’s naïve wandering to the harsh plywood lines of the bath’s wooden floors and the evil of men.

Othello is shot in skewed angles, its characters never on a level playing field, eyes and bodies all aslant and drawn downward by gravity and passions. The film is edited into a frenzy, scene dissolving into scene with an energy that reflects the Moor’s distractible mind and also happens to distract the viewer from the troubled production’s threadbare seams.

Seams do show. As Welles frequently did during this period in his career, he overdubbed actors whose performances he found subpar, and you can clearly hear Welles’ voice in much of Robert Coote’s “performance” as Roderigo. Yet this is a feature, not a bug; Iago manipulates the weak Roderigo much as he does the ostensibly powerful Moor, and Welles’ omnipresent voice shows him to be always in view and always the fool.

The casting is not perfect. Iago is typically cast as a creepy and in this case possibly impotent foe, a fly who would seem to have little power over the momentous Welles. Although we have MacLiammoir to thank for the historical record of the movie’s production, he seems a weak foil. Othello is felled by a gnat, but the man who truly brings him down is himself, by allowing the emotions he owns to run away based on the bad seeds sown in a body ground ripe for fowl fruit. Othello passed Iago over for a promotion, favoring the younger Casio. This provides the villain’s motive, but beyond the specifics of rank in the Venetian army, the role of Iago, one of the juiciest in all of Shakespeare, resonates with Welles’ early work: what was Charles Foster Kane but a kind of Iago who manipulated the populace by means of his communications empire? Iago is Othello’s personal media trainer, fueling his character’s self-destruction and the man’s weakest point: his mind.