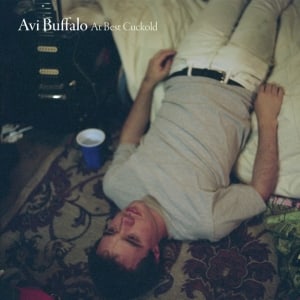 [xrr rating=4.0/5]What was surprising about Avi Buffalo when they released their 2010 self-titled debut wasn’t just how solid it was but the confidence and catchiness of the California band, despite being composed of mere teenagers. Helmed by frontman/mastermind Avigdor Zahner-Isenberg, Avi Buffalo seemed already primed to take up the torch of pioneer indie label Sub Pop, offering an album of teenage angst and charming pubescent missteps (some probably intentional, some most likely not). Avi Buffalo was already functioning at a very high level before they embarked on a world tour or performed with the likes of Jeff Tweedy. For all of its immaturity, the debut was something unhinged, raw and real. It was a clear representation of teen apprehension and honesty and confusion—all funneled into an unassuming, unpretentious concoction of indie folk-rock. It was wonderful.

Four years later, Zahner-Isenberg and company are back with a proper sophomore effort, At Best Cuckold, an album that faithfully builds on an already solid foundation. Upon the opening notes of lead-off single “So What,” it’s apparent that Zahner-Isenberg, at just 23, may not be much older, but he is certainly wiser. Self-assuredness permeates the album, and “So What” is a clear indication of what’s to come: tight, clean song structures and a crisp production (courtesy of Zahner-Isenberg himself) that caters to the songs’ every mode and movement. From the fuzzed-out backdrop of guitars on the excellent “Think It’s Gonna Happen Again” to the graceful piano noodling on “She is Seventeen,” the songs showcase an adept musical breadth of skill and sophistication that Zahner-Isenberg has only improved upon since his last outing.

Luckily, though, those juvenile miscues are usually eclipsed by quality songcraft and lyrics geared more toward deep-cutting anxieties and disappointments. If Avi Buffalo were to put all of their eggs in that basket, there’s no stopping the band from creating a career-defining album that resonates for years to come. Still, the discrepancy between At Best Cuckold’s seasoned sound and unripe lyrics is something to enjoy—it’s what continues to make Avi Buffalo’s work a natural extension of the confusion and apprehension that go along with coming of age. Like the world around us, the puzzle pieces don’t always fit, but the result is still something to behold.