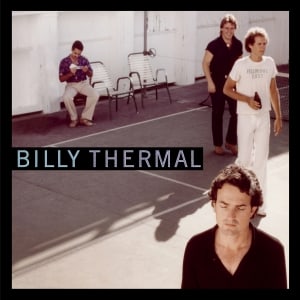 [xrr rating=3.0/5]“I told you about the dream/ I felt the blade of panic/ I thought I was schizo/ I thought I was romantic!” An angst-ridden singer blurts this over a brooding minimal guitar riff, getting more and more agitated before a chorus brings succor and release in the form of a catchy hook. This is the pleasure and pain of pop music, the kind of public neurosis-with-a-beat that has fueled generations of misunderstood teens. Struggling singer-songwriter Billy Steinberg was seeing a psychoanalyst at the time he wrote “I Tell You My Dream,” the song a way of dealing with acute anxiety. This being the late ’70s, the song took the logical recorded form it could take at the time: new wave.

Billy Steinberg shopped around demos of original songs in 1978, and thus Billy Thermal was born. The demos got the attention of producer Richard Perry, and in 1980 the group recorded an album’s worth of songs for Perry’s Planet label. But by 1980, the first round of new wave bands had found their commercial success, and the market for new wave seemed to be tapped out. Perry got cold feet and let Billy Thermal loose to release an EP on their own. It went nowhere. But that EP planted the seeds of Steinberg’s future success as a songwriter. Billy Thermal’s own version of “How Do I Make You” was a perfectly catchy anthem of sexual frustration, and it led to a top 10 hit for Steinberg when Linda Ronstadt performed it on her own new wave album. Pat Benatar named her third album after Billy Thermal’s “Precious Time.” And that was just the beginning… for Billy Steinberg.

Billy Thermal is the latest in a long line of reissues of neglected, forgotten, and in this case, unreleased albums. Many such archival releases resurrect an artist lost to time (Lewis) or who simply walked away from the business (Sid Selvidge). Billy Thermal is an exception in that its auteur went on to great success as a songwriter. Steinberg went on to a long and successful collaboration with songwriter Tom Kelly, the pair writing hit songs for Madonna, Cyndi Lauper, Whitney Houston, the Bangles and Pretenders, just to name their greatest hits. Several years ago I had the pleasure of seeing Steinberg and Kelly perform their own versions of “True Colors” and “Like a Virgin,” the latter of which featured an inspiring falsetto by Kelly made even more daring by the fact that he was performing it in front of members of Congress.

Billy Thermal was an excellent EP and is a good album. As perhaps suits a songwriter who went on to write hits for other voices, his own band doesn’t have the kind of distinct sonic identity that would make this a lost classic, however catchy their songs. I hear a little Tom Verlaine (or Richard Hell) in the vocals, a little Split Enz in the melodies, even a little Gang of Four in some of their funkier rhythms. Then again, those aren’t bad references to have. Billy Thermal’s prickly riffs, agitated vocals and angst-ridden lyrics would have sounded perfectly fine on the radio 35 years ago, but they broke up before anybody had a chance to hear them. Billy Thermal is no forgotten masterpiece, but it’s a good new wave album that you never knew existed.