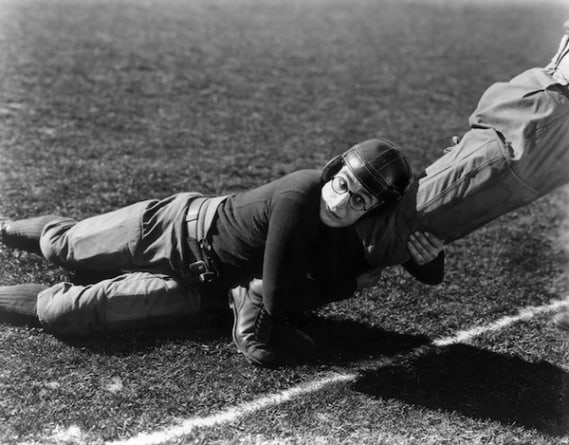 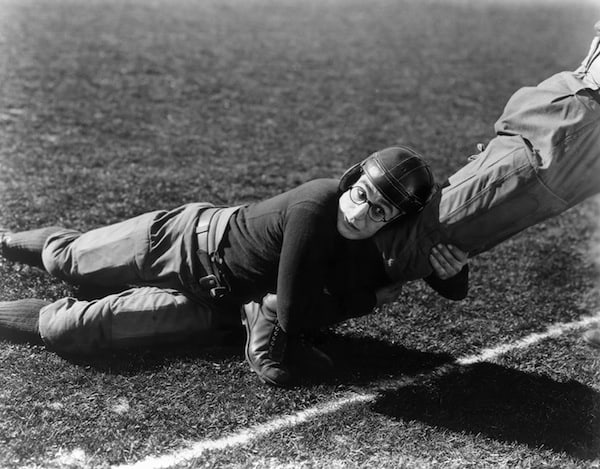 We all want to be liked. Charm may come naturally for some, but others are so hopelessly awkward that they are willing to do anything just to be liked. Nearly 90 years after its release, Harold Lloyd’s ugly duckling story, The Freshman, carries themes that anyone who struggles to fit in will recognize and appreciate. While some of the specifics are no longer de rigueur, the heart of Lloyd’s film will still touch anyone who has been or felt alienated.

We first meet Harold Lamb (Lloyd) as he is preparing to leave home for college. It is a hallowed time in any young man’s life, the first push out of the nest, an ascension to a sacred institution of higher learning, booze and women. But as the poor guys from Revenge of the Nerds would learn decades later, football players are cool. Bespectacled book worms are decidedly not. Lloyd and directors Sam Taylor and Fred Newmeyer instantly endears Harold Lamb to us. He is not packing his bags are enrolling in classes. Instead, he is practicing his social graces by emulating Speedy, a fictional character from the film The College Hero, right down to his dress and funny little jig he gives when introducing himself. As his parents surmise, Harold is going to have a tough time when he gets to school. 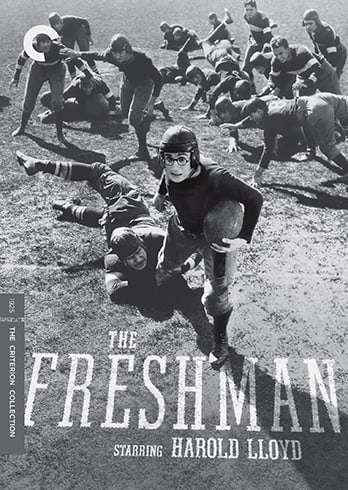 It is impossible to write about Harold Lloyd without referencing the other titans of the silent age, Charlie Chaplin and Buster Keaton. While Keaton and Chaplin dealt with social issues in their films with their characters frequently outcasts, Lloyd (and his signature “Glasses Character”) often tried to earn success and charm his way into the mainstream. When Lamb arrives at college, his cool is to ascend to the top of the popularity ladder. It is an almost naïve buying into the American Dream, an illusion that often pushed out the Little Tramp and Keaton’s myriad of acrobatic characters.

But it’s that naiveté and gentle innocence that makes Lloyd and his films so likable. We want his hero to successfully scale a building in his 1923 masterpiece, Safety Last! We want Lamb to fall in love and reap the same level of respect that the other men around him garner in The Freshman. Unfortunately, this hopeless romantic immediately becomes a patsy, the butt of many jokes, as soon as he arrives, the more popular boys duping him into believing that they like him, but actually laughing behind his back. When he tries out of the football team, the coach uses him as a human tackling block before making him the water boy, tricking him into thinking he is on the team. Even his best intentions blow up in his face. When he is tasked with heading a fall dance, his woozy tailor crafts him a tux that threatens to dissolve at any moment.

In many ways, Lamb is so focused on popularity that he won’t allow himself to believe that his new friends are laughing at him. He is so hopelessly lost in the dream that even his paramour, Peggy (Jobyna Ralston), won’t burst his delusions. However, the moment he does realize the truth about his “friends” is inevitable and when it happens, Harold collapses into a heaving mass of tears.

So what is the lesson here? That popularity at all costs should be our aim? Luckily Lloyd and his directors stretch it a little further. Peggy tells him, “Stop pretending, Harold – be yourself! Get out and make them like you for what you really are and can do!” And while such sentiment may feel a little pat, The Freshman’s climactic football gives Harold the chance to prove himself, on his own terms. It feels good and earned, especially after watching nearly an hour of Harold unwittingly make a fool out of himself.

Lloyd is an artist ripe for rediscovery, one who often falls in the shadow of Chaplin and Keaton. Lloyd’s admirers like to point out that, unlike many of the other silent clowns of his era, Lloyd enjoyed a prosperous retirement, maintaining control of his films and living out his final days pursuing his hobbies without concern for money. It may seem like kismet, but Harold Lloyd was able to enjoy those American Dream pursuits he dangled in front of his Glasses Character, an ideal that may have waned in the flickering days of America’s moral and financial erosion.