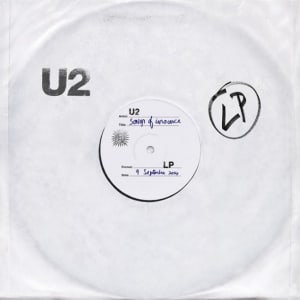 [xrr rating=3.0/5]When rock criticism first got started, its utilitarian purpose was to help readers decide which albums to buy. There was only so much money in everyone’s wallets and visits to the record store needed to reap rewards. What music junkie wanted to come home with a subpar Cream LP when they’d read in Rolling Stone about how life-changing Iggy Pop was? Things have changed a lot since then. Now, everything’s available at the click of a button, usually for $9.99 or free, depending on your conscience. So when U2 distributed their new album, Songs of Innocence, for free through iTunes, some viewed it as a present and others as an invasion of privacy. The band meant it as a gift and their fans received it as such, but plenty of others want to live their lives Bono-free. Amidst the clanging blogospheric voices, here’s another take on the album that anyone with iTunes now owns.

Songs of Innocence isn’t going to convert anyone but it’s a nice surprise for the kinds of people who hide their copies of All That You Can’t Leave Behind behind Kid A when they’re throwing parties that their judgmental “Ian Curtis is God” friends are invited to. Considering its immediate predecessor, No Line on the Horizon, was one of U2’s weakest offerings yet, the record is a breath of fresh air. Their sound has changed a lot since they first premiered with Boy but there’s something characteristically hopeful about this record that can be found on The Joshua Tree or The Unforgettable Fire, too. No Line struggled with being either too soft or too hard for comfort but Songs of Innocence goes back to the days when they toed that line in the way they knew best.

Things get started off with a fuzzy guitar line and clear-eyed lyrical respect. “The Miracle (Of Joey Ramone)” is a proud tribute to the punk rocker who breathed life into the young Irishmen before the blue sunglasses and corporate deal with Apple. It’s U2 unafraid of rock and roll, but still humble in its presence. For a band that’s postured itself as the biggest in the world, it’s nice to see them starting their most grandiose move yet with a tone of veneration. The following tunes, “Every Breaking Wave” and “California (There is No End to Love)” may not be the most original songs in their catalogue but that’s precisely why they’re endearing. This time around, they aren’t going for new anthems a la “Sunday Bloody Sunday” and, as a now-aging band, that’s respectable. It isn’t about widespread relevancy anymore; it’s about giving their fans what they want and leaving the door open for anyone else to get in the bar without a cover charge.

As the album heads to its ending, Danger Mouse’s production becomes more pronounced. “This Is Where You Can Reach Me Now” sounds like it’d be just at home on a Broken Bells or Gnarls Barkley record as it is here. Early Gary Numan keyboards take a pleasant forefront on “Sleep Like a Baby Tonight,” taking things back to the eighties where this whole shindig got started in the first place.

So yes, U2 has a new album out and a lot of people are going to say it’s the worst thing ever. Of course, it’s hard imagining them ever garnering any music snob’s respect since they played Live Aid to a crowd of thousands in 1985. Songs of Innocence may not be the best thing you’ve heard all year but it’ll be far from the worst.