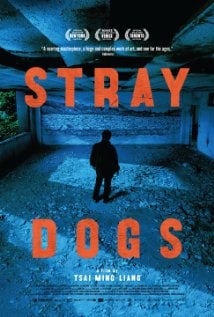 [xrr rating=4.5/5]As two children sleep deeply and peacefully, a woman (Yang Kuei-mei) sits beside them, looking on silently as she brushes her hair. She brushes slowly and deliberately, barely turning enough to show the camera her face. After a few minutes, she stops brushing and looks longingly at her children and beyond the frame of the image, as if ready to walk out and achieve something quite literally beyond our perception. We won’t see that woman again—at least, not looking quite like that—but the water-damaged walls she looks at will reappear much later.

This shot is perhaps the key to Stray Dogs’ narrative, as it may help to clarify the film’s central uncertainty. That first shot excepted, the first two-thirds of the film depicts a man’s (Lee Kang-sheng, Tsai Ming-Liang’s regular leading man) relationship with his two children, who spend their days exploring the woods or the beach. The man’s job entails standing out in the rain with a sign advertising ludicrously expensive apartments. The family must use public restrooms to brush their teeth and find sustenance in free samples at a supermarket, where they catch the eye of a woman (Lu Yi-ching) who we later see taking expired food to an abandoned building to feed stray dogs and gaze at a mural. But with about 40 minutes left, the film takes a strange turn; there is a quick cut to black before a candle is lit and we those water-damaged walls again. The two kids are with a woman played by Chen Shiang-chyi, and candle light gradually reveals the father’s presence as well. This woman also feeds the stray dogs and gazes at the mural, so we know that she is the same character as the previous actress, while the water-damaged walls tell us that the woman played by Yang Kuei-mei was also the same character. Three different actresses play the same woman.

This choice, brushed aside by Tsai simply as his desire to work with all three actresses one last time should Stray Dogs be his final film, has led many critics to compare Stray Dogs with That Obscure Object of Desire, the final film of the great Luis Buñuel, in which two actresses play the same woman. In that film, the device has a clear purpose; when the male protagonist thinks he has finally won over the apple of his eye, she will briefly hide behind a curtain and then reappear, now played by the other actress, who is much less sympathetic to the man’s desires. Stray Dogs does not have such a clear purpose, but it may suggest a chronology. Perhaps the four characters were a family, maybe one that fell from riches to rags, if the nice massage chair in the water-damaged apartment is meant to signify something. But the mother decided to leave, possibly influenced by her husband’s drinking habit. As she gazes at the mural in the film’s longest shot, occasionally moved to tears, he stands behind her, taking a swig of spirits every now and then, as he does throughout the film. It could even be the drinking habit that made her leave, as she presumably does between the film’s first and second shots. The majority of the film, then, is the “present,” and a build to a thrilling end to the story, if not the film.

Precisely what happens in that end is one of the film’s great treasures; greater than how Tsai uses four separate shots of Lee Kang-sheng holding up his sign at a heavily trafficked intersection, first to reveal the surroundings by pulling the camera away for shot two, then privileging the character by getting closer for shots three and four, the last of which calls politics to the forefront thanks to the recitation of a patriotic poem; greater than a heart-wrenching and terrifying devouring of a head of cabbage that signifies loneliness, fear, lost family, and even a drop in status thanks to earlier shots that take eating as their subject ; greater, even, than the aforementioned shot of the two parents staring at an unseen mural in a low-angle medium shot. In the work of Tsai, a director rightfully synonymous with “Slow Cinema”, this probable homage to Charles Laughton’s decidedly not slow Night of the Hunter arises seemingly out of nowhere: comparatively quick, energetic cuts are suddenly used to quickly create confusion and suspense. Here we see one of the virtues of Slow Cinema, which exposes underlying rhythms, assumptions, of ways of conveying information (as in the aforementioned intersection shots) by emphasizing duration and stasis: When Tsai switches to shorter takes they are often ten and even 20 seconds long—hardly rapid, particularly in today’s age—but next to minutes-long shots of eating cabbage or staring at murals, this sequence starts and finishes before you know it.

These rhythmic aspects are at least as important as the narrative happenings. Tsai’s frames are so carefully composed, his uncommon camera movements so calculated, and his cuts, rare as they are, so impeccably timed, that the feeling of a master at work rarely, if ever, fades. The shots of the trafficked intersection are full of cars and trucks passing in front of the camera to obscure vision, forcing us to re-scan the image for any potential changes and reorient ourselves each time. Performances are astonishing, calling on characters to cry and withhold tears on command, often times within the same shot. The recurrence of water acts as a motif to tie the film together even as shot after shot seems entirely unconnected to all that came before. The final scene, in the ruins, with the dog and mural at once, critiques the position of humanity and privileges our ability to find solace in art. Stray Dogs is full of pleasures that need to be witnessed to be believed. Even if the narrative is not fully understood, something essential about the rhythms of the cinema might be.