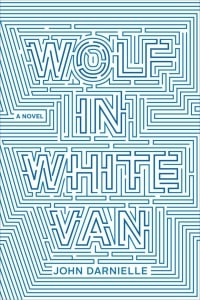 [xrr rating=3.25/5]The New York Times dubbed it “The Cowboy War,” the tale of two towns who, in 1887, took to their weapons as they vied for the honor of county seat of Wichita County, Kansas. A slew of gunmen hired by the tiny town of Leoti stormed nearby Coronado, leaving several dead in their wake. In response, Coronado brought in legendary lawmen Wyatt Earp, Doc Holliday, Bat Masterson and others to defend them, but it was too late: Leoti became county seat, and Coronado quickly dissolved into the Kansas dust.

In Wolf in White Van, the modern-day ghost town of Coronado figures as a main landmark in Sean Phillips’ play-by-mail game known as Trace Italian. Sean is a 30-something man with a monstrously disfigured face, the result of a gunshot suffered in his teens; he frequently refers to this as an accident, though whether that is true or not is questionable. As he recovered in the hospital, drifting in and out of consciousness, he crafted the beginnings of Trace Italian, the subscribers of which, all these years later, still provide him with a small income.

Sean thinks of Kansas often, not the Kansas we know with its Wild West mythos or muslin tornado whisking little girls off to a Technicolor dreamland, but the post-apocalyptic wasteland of Trace Italian where the prairies have been melted down, flattened into slick trinite. It’s an escapism that soothes Sean, as it must have also soothed two young players of Trace Italian who, conflating fiction with reality, trekked to the real Kansas and found themselves abandoned outdoors in the middle of a harsh Midwestern winter.

Singer-songwriter John Darnielle’s first proper novel — he previously published a fictionalized account of a troubled teen as critical analysis of Black Sabbath’s Master of Reality for the 33 1/3 Series — is a gentle work, despite its harrowing subject matter. Sean seems benign enough at times, mischievous and delusional at others. One wonders if he has deliberately blurred the line between fantasy and reality within Trace Italian, or if his own need for escape was so great that other people were unwittingly carried out to sea on Sean’s emotional tide.

The same blurring of the boundary between reality and fiction occurs within the book itself. Much of Wolf in White Van is a what-if scenario based on the very real life of James Vance. In 1985, Vance, then 20 years old, attempted to kill himself with a shotgun, but succeeded only in grotesquely mangling his face. He survived for the three years after this attempt, claiming that the music of Judas Priest had “programmed” him to commit suicide. Sean is Vance, had he lived; Wolf in White Van is an autobiography written by a ghost.

Besides the Judas Priest case, there are a slew of other cultural references strewn across the pages, too, often subtle details ripped straight from the author’s various social media accounts as he inserts himself in little bits and pieces throughout. There are indirect nods to Darnielle’s own musical lyrics, home-recorded cassette tapes by indie musicians make an appearance, and Sean muses on how being famous in public must be a lot like having a face “like tire tread.”

At times fascinating, even cheeky, these details unfortunately never coalesce into a satisfying whole. They remain particulate; some individual moments are clever, others painfully self-conscious, a few self-serving, almost all manipulative. The result is an uneven tone, most notable at the end of the first half of the book. It’s a scene where Sean recalls watching a late-night religious show discussing the threat of hidden messages in rock songs. Equal parts delightful and incredible, these few pages contain some of the finest writing of Darnielle’s career, lyrics included. At the same time, it is completely inconsistent with the rest of the novel, as though it were written first, and the hundred or so pages leading up to it were filler meant to be waded through, just to get to the good stuff.

Sean is, for the most part, a dry and dull narrator, surely a product of his stunted emotional growth, and while that makes a kind of sense, it doesn’t always make for good reading. It’s most difficult when Sean speaks as though he were writing his own story, complete with the amateur pacing of an inexperienced author, such as several paragraphs in a row that all end with a zinger or a punch line, followed by another chunk of paragraphs where every sentence is a quotable full of vast import.

Wolf in White Van is about the art of survival. It’s an exploration, at times a celebration, of our ability to adapt to the unimaginable, to escape into any avenues necessary to endure what must be endured. Yet the novel suffers from an unappealing self-consciousness, resulting in stilted, overly-mannered scenes that sometimes feel like the author personally apologizing for his own lack of confidence. That’s not to say Wolf in White Van is a bad book, because it is not. It is a fine novel, but very much a first novel, written by an author with incredible potential.