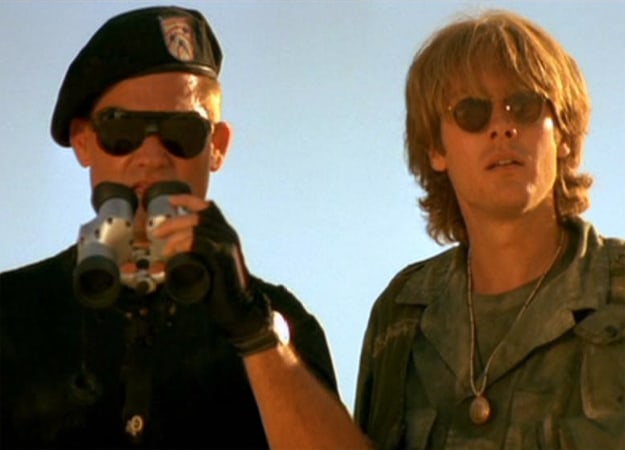 Few ideas are original, especially when it comes to Hollywood action blockbusters. This year marks the 20th anniversary of the birth of the Stargate franchise, which all began with the Roland Emmerich film, written by Emmerich and Dean Devlin. A combination of Lawrence of Arabia, aliens and Egyptology, the concept was original, and proved to be the director’s breakthrough, paving the way for him to make Independence Day two years later. The seeds of the “Master of Disaster” director’s action-explosion niche are evident. But with no tangible apocalyptic threat, and an explosion that destroys the bad guy, not New York City, the film hardly registers as an Emmerich project.

The legacy of the Stargate franchise, spawning three television series to date, is a testament to a solid initial concept that resonated with audiences. Yet Stargate was not a hit when it was released, criticized for its slow pace, writing and effects. The military aspects led to an overreliance on war film clichés and a horrendous final act, featuring the line “Give my regards to King Tut, asshole.” But the pacing works to the film’s advantage. The Emmerich stamp is all over the finale, but the lead up is firmly entrenched in world building and character development, melding history and myth with science fiction.

With a premise that ancient astronaut theorists would drool over, Stargate begins with the discovery of a circular “gate” buried at Giza and covered in cryptic hieroglyphs. Washed-up Egyptologist Dr. Daniel Jackson (James Spader) is naturally the Air Force’s first choice to decipher these indecipherable codes. Dr. Jackson discovers that the hieroglyphs chart a course through space via constellations. When the Stargate is activated, a portal between worlds opens to reveal another gate on a planet on the other side of the known universe. Jackson, along with Col. Jack O’Neil (Kurt Russell) and other officers embark on a mission to discover what lies beyond the Stargate. The team find themselves inside a pyramid identical to those in Giza. (I’m not saying it was aliens. But it was aliens.) Nearly halfway into the film, the team finally begins to explore this desert planet and discover a city of slaves whose ancestors were brought there via the Stargate by the Egyptian sun god Ra to work the mines. 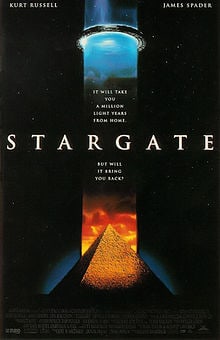 The film’s Egyptology follows the recognizable formula of the archaeological adventure. But Stargate is far better than its later counterpart, The Mummy. It has space aliens! Granted, Stargate doesn’t make a big deal out of the alien presence. Jackson and his colleagues are never in disbelief or denial, just in awe. For the failing Egyptologist, this is a quest for answers more than anything else: a brief, paid stint with the Air Force that includes free interstellar travel, potential answers to gaping holes in his field and the prospect of never returning to Earth. The fact that an alien exploited a civilization and left behind one of his high tech gadgets buried in the desert only rationalizes myth and allows for a concise connecting of the historical dots.

In many ways, Stargate subverts the ‘90s action blockbuster formula. The most clichéd part of the film is top-billed Kurt Russell, whose depressed colonel still manages to be a badass. His miniscule backstory is covered in one scene after his son accidentally shoots himself with his gun. On the other side of the universe, Col. O’Neil gives trunk loads of guns to primitive kids and enlists them to overthrow a power-hungry alien. Spader was an unconventional choice for action movie leading man. His Dr. Jackson is appropriately inept and naïve, but his resilience and hunger for knowledge carry the narrative. Most intriguing is the androgynous Ra (Jaye Davidson). His disturbingly calm exterior and distorted voice make for an unnerving villain. It’s too bad Ra is absent through much of the film.

The film’s fascinating special effects and otherworldly production design were executed on a $55 million budget. The Stargate itself is an ingenious piece, its moving parts creating the sensation of dialing into the very core of the universe. Ra’s pyramid-shaped spacecraft is unique in its intricate interlocking parts, and the alien-god’s torture devices and revolving sarcophagus are incredibly creative. The film has dated in parts, the clunky animation here distracting at best. Despite its technical faults, Stargate is still one of the best sci-fi films of the ‘90s, and looks gorgeous for its age, thanks to golden hour cinematography.

Stargate is due for a three-movie reboot to be directed once again by Emmerich. Does a reboot of a 20-year-old original idea made by the original writers count as an original story? The impending reboot will be argued over until the inevitably massive blockbusters are released. Even if the new trilogy disappoints, the franchise will have lived beyond its twentieth anniversary, a rare accomplishment.

Since Stargate, Emmerich has tackled major blockbuster disaster films like Godzilla, The Day After Tomorrow, 2012 and White House Down and created a name for himself in that genre. Explosive special effects are now ubiquitous in his films, and beginning with Independence Day’s $75 million budget, the director has been able to attain increasingly larger budgets to make his apocalyptic films. Within his oeuvre, Stargate stands out not only as a highly creative and original concept, but also as a film that benefits from reining in the compulsion to destroy and decimate civilizations.