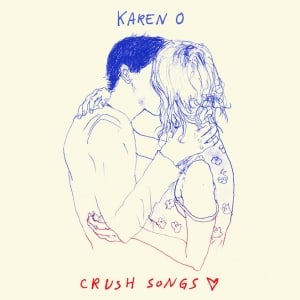 [xrr rating=3.0/5]When is a debut not a debut? Crush Songs may be Karen O of the Yeah Yeah Yeahs’ first official solo album, but it’s not as though she hasn’t been working without the band for some time now. Her sterling work on the soundtrack to Spike Jonze’s Where the Wild Things Are was in 2009, and just last year, she was nominated for an Academy Award for Her’s “The Moon Song.” She appeared solo (backed by the Million Dollar Bashers, a supergroup composed of Sonic Youth, Wilco and Television members among others) on the I’m Not There soundtrack, and, in general, has not shied away from a career outside the Yeah Yeah Yeahs. So, is this really our first glimpse of O by herself? Haven’t we already been hearing it?

Maybe she has already thought about this, because Crush Songs is all about O by herself. The singer hasn’t just put out an album without the band; it’s an album with barely a trace of anyone else. Collected from a series of recordings made between 2006-2010 (that’s around the era of Show Your Bones to It’s Blitz!, for anyone keeping track), the 15 tracks here are essentially demos. It is falteringly recorded and full of minor mistakes that a professional studio would buff away, with most songs being nothing but O singing and playing guitar. Even that’s not a strong enough description of how stripped down they are; some of the tracks are essentially a repeated riff for about a minute or so, just a repeated note and a vocal melody.

It’s a typically daring choice, really. As a singer and a frontwoman, O has never followed convention, and releasing a collection of extremely lo-fi bedroom recordings as her first official solo sticks to that reputation. These are the kind of tracks you’d expect from a forgotten twee-pop artist who never left their bedsit apartment, not the singer of a popular and influential rock band. That’s part of their charm, that this is clearly O at her least guarded and produced, simply a singer singing songs about fleeting infatuation. The title is no joke; the songs here are all about the kind of crazy, wistful almost-love that we all get and forget, from the first single “Rapt” to the deep-cut Doors cover “Indian Summer” to “Day Go By.”

There’s a problem, though. While you have to admire her consistently inconsistent approach to stardom, all you’re left with is an interesting conceptual hook behind a bunch of underdeveloped songs. While O’s always-striking vocals carry many of the tracks (like “Singalong”) and her lyrics have their moments (like “I can cough, I can choke/ On this colour smoke/ Off went the switch/ Love is soft, love’s a fucking bitch” in “Rapt”), they are honestly just sketches of songs. Few have more than a rudimentary melody; with the exception of a yelp in “Body,” her distinctive tics are rarely on display. They feel like the mere beginnings of songs, which has a two-fold effect: there’s no mask covering the emotion on display, but there’s also not much to them.

It is likely that O will get more criticism for the slightness of the songs than their genuine emotion, which is unfortunate. There’s no “Maps” here. There’s not even a “Sacrilege.” But this isn’t a Yeah Yeah Yeahs album, and expecting something like that from Crush Songs is missing the point. It is unlikely to be an album ever dug up as a forgotten classic, but it’s certainly a fascinating next step in O’s career.