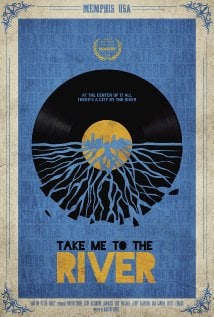 [xrr rating=2.0/5]Memphis soul music changed the world. Stars like Al Green, Otis Redding and Isaac Hayes and record labels like Stax and Volt had an enormous cultural effect that transcended R&B. Heck, they transcended music and became symbols of their time as much as the Beatles or Muhammad Ali. No one is disputing this, which makes it a little odd that Take Me to the River feels the need to constantly reinforce the deep significance that the music of Memphis (with a particular emphasis on Stax) holds. It is important to start a documentary of this type with a strong thesis, but after a while, the reiteration of what this music did starts to wear. After all, it’s there in the songs.

Directed by record producer Martin Shore, Take Me to the River has an important subject in mind and a decent reason to discuss it. Shore, along with musicians Cody and Luther Dickinson (the sons of legendary session musician and producer Jim Dickinson) are putting together a compilation album of Memphis hits, with the hook being that the surviving stars of the era re-record some of their most famous tracks with up-and-coming musicians. The general idea is that the older generation (including Otis Clay, Mavis Staples and William Bell) mentors the next, and to its credit, there is a palpable feeling of joyfulness from the assembled musicians, whose combined musical experience literally spans centuries. In practice, however, it comes down to new recordings of decades-old songs with a rap verse thrown in. While none of it is terrible, most does sound extremely inessential, even more so when the originals themselves are so uniformly powerful.

The first half of the film is largely taken up by these sessions (and narration, oddly, by Terrence Howard), but Take Me to the River sharply changes direction into what is basically an oral history of Stax Records. Thematically, it makes complete sense and is absolutely fascinating subject matter, but this approach is so disjointed and introduced so late that it makes the documentary come off as two separate films, like a mashup of Ken Burns and a middling VH1 behind the scenes featurette. As a first time director, Shore can probably take the blame for this odd structure; he’s extremely fortunate to have access to individuals like Stax co-founder Al Bell, who add a passion and immediacy that the film often lacks. More damningly, there’s such a pervasive, unfaltering sense of bonhomie that the film feels more like a curated PR exercise than a documentary of events. The closest we get to a glimpse of what any of the primaries feel beyond “Memphis is great!” is Bobby “Blue” Bland bemusedly questioning from his wheelchair whether he “has” to listen to the Yo Gotti verse dropped into his recording, but it’s quickly smoothed over. There’s potential tension beyond a sense of nostalgia there, but Take Me to the River doesn’t seem inclined to investigate it.