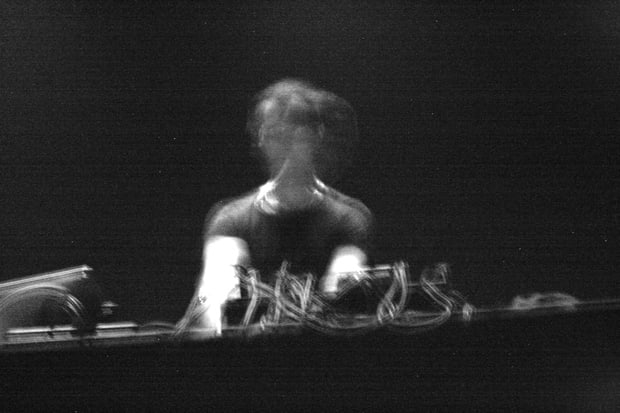 It begins and ends in darkness. A small dais sits in the middle of the stage and after the audience sits, the lights dim and the near blackness, the shape of a man appears behind that podium, the control center of the hour-long wave of noise that will cocoon us, soothe us, frighten us. Tim Hecker is the type of musician who uses phrases such as the “despotism of the eye,” so the cloak of darkness makes sense. We can’t see his face. It’s hard to make out his hands. Are we meant to close our eyes? He must really mean it.

Hecker is making his first Portland appearance as part of the TBA Festival. Time-Based Art. Because you really do forget about time at a Hecker show. It is the opposite of and the same as a Swans concert which accomplishes a similar feat yet is aggro while pulling you in. Hecker sweeps you up but it’s less a full-frontal assault. He creeps in, dazzling you with bass before capturing the imagination. Michael Gira and Swans pummel you and pummel you. Hecker’s music is like a deep, very deep, yoga position. You get lost. You forget about time. The hour ends before it seems like it begins.

Festival organizers handed out surveys before the show. Little yellow slips to the pass holders in the front, the VIPs who lined up ahead of them, then the folks with the regular GA tickets and finally to the people on standby, hopefuls that spilled down Lincoln Hall’s steps and out onto the mall of Portland State University. Who really listens to Tim Hecker? Indie kids who follow Pitchfork’s Best New Music suggestions with slavish devotion? Or was it folks like me? White. Wearing glasses. Educated. There were a good deal of nicely dressed people in attendance. Maybe the blurb in the festival literature looked good. Did they know what they’re in for? Festival organizers pass out ear plugs as we enter. Thank you for caring.

Hecker takes off his sweater or shirt or something during the performance. It is the only motion I can clearly make out besides the appreciative hands joined together, a gesture at the show’s end. But doesn’t matter. Hecker boils it down to the experience and the experience of experiencing music. He trusts us. Believes we don’t need a multimedia show to focus. One time I was in a cave and the guide shut out the lights, snaring us in pitch darkness. Hecker’s music felt like that moment in the cave.

I can’t say my mind didn’t wander during the show. But maybe that’s the point? I let the thoughts play out and then returned my focus to the dark stage. The music never left me, however.

“Have you ever seen Tim Hecker?” I asked someone in the music industry.