October 19, 2020
Home Books No Good Men Among the Living: by Anand Gopal 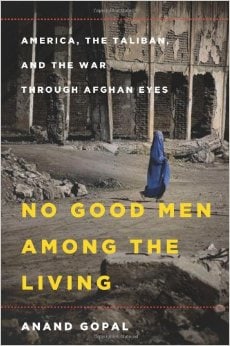 [xrr rating=4.0/5]No Good Men Among the Living induced many emotions in me, from sadness to excitement to wonder. But most frequently, there was anger. Because Anand Gopal’s groundbreaking book on the war in Afghanistan, subtitled America, The Taliban and the War Through Afghan Eyes, covers such a wide array of experiences, jumping back to before the Soviet invasion and up to the war in 2012, he can explicate countless failed opportunities and just as many forced by the rules of the War on Terror. And the weight of what he reports is crushing: that a war almost won by early 2002 became reignited by rivalries, expectations and the false dichotomies of a war on an abstract concept.

Gopal spent years in Afghanistan as a foreign correspondent for The Wall Street Journal and The Christian Science Monitor, filing stories about the Taliban after living with them. No Good Men is steeped in this, cutting to Gopal conducting interviews with warlords, housewives and reclusive Taliban commanders. He applies this approach to the stories of others throughout, opting for on-the-ground narrative over straight news copy. In one of the most thrilling sections, he cuts between the viewpoint of an American commander and his Taliban counterpart during the battle of Tirin Kot, an important early victory in Uruzgan Province. We step in the shoes of Hamid Karzai and Taliban leader Mullah Omar alike, as well, briefly, of a shepherd boy on September 11, among others. Though he quotes Americans, Gopal stays true to his book’s subtitle.

To this end, he focuses in on three particular stories, those of a Taliban commander, a governor and a house-bound woman: or, in Gopal’s phrase, “in the language of America’s categories; our enemy, our ally, and a civilian.” These three seemingly disparate narratives come together quickly, as the Talib who vows never again to fight is drawn back in by the violence and backbiting created by the governor and others like him, which quickly impacts the common woman and her family. Their stories, told in their own words, are often riveting and frequently disquieting, and Gopal uses them to deconstruct and eventually destroy the terminology of the War on Terror.

What he emerges with is a narrative of the war displaying how adherence to the new century’s language of animosity turned a resounding victory into a quagmire, how an American desire to find enemies, somewhere, allowed prominent Afghanis to make millions creating dangers from their political and personal opponents, even if those opponents, like many Talib-beaten Afghanis, supported the new US-backed regime. In a chapter titled “Black Holes,” Gopal details the ways in which local animosities dismantled the new governments, sending thousands of innocents to Kandahar and Bagram air bases, and eventually to Guantanamo Bay. He quotes from the file of a bus driver, whose “Reasons for Transfer to JTF GTMO” are listed as “Detainee’s file does not indicate why he was sent to JTF GTMO.” With local political violence spreading, and with many losing access to the Americans as their elders were locked up without evidence, support for Karzai and the Americans turned to animosity.

This could be viewed as American troops snatching defeat from the jaws of victory, but Gopal refuses to view the war on such abstract terms. He presents very little from America’s presidents, does not use the political calculus of news reports and army press releases. In his book the damage is painfully real, not an abstraction but all bodies full of bullets or houses turned to rubble. Reading No Good Men impresses just how infrequently the views of Afghanis and the damage done to them are considered. Gopal does not argue against the invasion, and in fact makes cases for the rise of the Taliban and against its shocking brutality so vivid one cannot but feel the joy of many Afghanis at the regime’s downfall. Doubly, then, is the pain of the violence returning.

No Good Men belongs in the same company as “Blind into Baghdad,” James Fallows’ 2004 article in The Atlantic detailing all of the warnings and preparations disregarded by the military’s civilian leadership before the invasion of Iraq in 2003. Both summon a similar rage at seeing the ways in which advice and knowledge are not merely misunderstood but actively ignored when wars are waged. Gopal envisions a future Afghanistan through the eyes of its citizens, pictures their hope and joy and then watches as it is destroyed. He asks only that we consider it too, and then ask where we stand. The answer might not be comforting for many.

[xrr rating=3.0/5]Without attaining much success, Centro-matic has been in the game for cl…