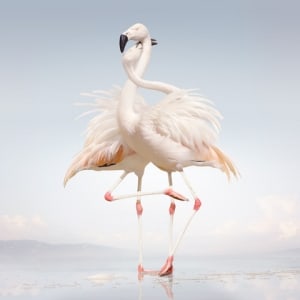 [xrr rating=3.5/5]Green Language, the belated follow-up to Rustie’s debut LP Glass Swords, is at once a continuation of that album’s maximalist electronic pop and something of a diversion. Rustie still employs every whizz-bang sound you can program in pursuit of a huge sound, but the results this time replace stand-out anthems with flowing beats that give even full-length tracks a feeling of ephemera. In practice, the album resembles the tour-de-force program Rustie played for BBC’s Essential Mix series back in 2012, which managed to collect both Rustie’s own outsized beats and the equally outlandish sounds of some contemporary hip-hop into a marathon sprint that managed to get techno cohesion out of sounds built for instant gratification.

“Workship” opens the LP with a shimmering lead up, up, up to the lower stratus, yet where most of the producer’s maximal kin would then follow with a dead drop back to 1,000 feet, Rustie gently pushes up into lower Earth orbit as the music fades into “A Glimpse.” Even the drop in that track isn’t much of one, just a minor disruption of mood by the addition of a beat; the only true shock comes when an electric guitar gradually slides in and out at the end of the song. “Raptor” is the first indication of the Rustie we all know and love, a track that starts at a peak and yet always seems to be building back up to itself as furious synths lock into rising patterns.

In keeping of his use of hip-hop in his Essential Mix, Rustie brings in rappers to bolster several tracks. “Up Down” has D Double E rapping over a glitching beat that interprets the title as an old-school video-game cheat code. A lilting, almost childlike synth pattern of thick chords underscores Face Vega on “He Hate Me,” an initially wide contrast that eventually resolves by stressing the benign giddiness of rap braggadocio. The best of these collaborations is with Danny Brown on “Attak,” which opens with what almost sounds like a jaunty emergency alarm before Brown launches into his verse so fast that the beat has to catch up to him. Generally speaking, the featuring tracks are so generous that they could pass for Rustie remixes of the rappers instead of guest spots, and nowhere is this synergy more fluid than with Brown. “Attak” is the album’s clear highlight, with Rustie’s stuttering and antsy beats matching up with Brown, who delivers revelrous lyrics with such speed and force that an invitation to smoke and drink starts to sound like marshalling troops.

If there’s any downside to the album, it’s that “Attak” more or less stands alone. Tracks like “Late Spiral” and the aforementioned “Raptor” have the requisite Rustie tempo and energy levels, but they are sketches more than complete works. There’s strong stuff here, including back-to-back, heavily processed guest tracks “Lost” and “Dream On,” but despite structuring his album as a club-ready mix, very little seems as instantly primed for the dancefloor as Glass Swords. If Rustie’s debut was one of the handful of recent electronic albums to truly work as a full LP, this is a reminder that the genre does not typically flourish with that format. Sometimes frustrating, Green Language nonetheless retains the core strengths of the producer’s sound while attempting to use the album as a format in a manner truer to the spirit of electronic music.