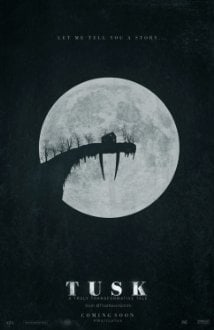 [xrr rating=1.75/5]In the summer 2013, the internet was abuzz about an online classified ad offering free room and board to a lodger willing to dress as a walrus. Kevin Smith joked about it on his podcast. Though the demented ad unsurprisingly turned out to be a hoax, it set the wheels spinning in Smith’s head for a horror-comedy (one in which the ad’s imaginative author even got an associate producer credit). The result: Tusk, which comes off like a dark 300-word joke stretched to the length of a feature film.

As with most Smith movies, Tusk is self-referential as hell. Justin Long serves as the Smith stand-in here. He plays Wallace Bryton (not to be confused with the Brighton walrus of the ad), a sophomoric podcaster who has risen to fame by traveling to interview weird people and then mockingly relaying these encounters to his cohort Teddy (Haley Joel Osment), who then laughs his head off. Since Teddy only hears about the freaks, they call their show the Not-See Party, and that pun is about as sophisticated as the humor gets. Wallace ventures to Canada (cue heavy-handed and unrelenting Canuck jokes) to interview the Kill Bill Kid, who’s managed to implausibly sever his leg with a samurai sword on YouTube. When Wallace discovers that the kid has killed himself, he intends to salvage the trip by answering an advert on a bar bulletin board posted by an old man who promises a whale of a tale to anyone willing to occupy a spare room. A couple cups of spiked tea later, Wallace wakes up with a missing leg of his own, with the old man (Michael Parks) spinning ridiculous lies about a brown recluse spider. Before long, Wallace will find that his captor means it when he speaks of really admiring walruses.

With a career that spans two decades, Smith has gone from a DIY filmmaker examining the lives of loquacious convenience store clerks to a box office mainstay. A reliance on his usual obsessions, including needless monologues, sinks the film early on. Otherwise, Tusk sets an ominous tone, as in the scene when Wallace enters a monster’s lair. Something sinister simmers from behind the fireplace-reflecting eyes of the old man, who offers literary quotes as readily as he spins yarns about meeting Hemingway in World War II. The film is derailed when it shifts away from Wallace’s impending dismemberment and reconstruction as a walrus to focus on flashback sequences or rescue efforts by outside sources. Wallace’s girlfriend Ally (Génesis Rodríguez) and Teddy (who are banging each other behind his back) eventually employ the help of an ex-cop from Quebec named Guy LaPointe (a rubber-schnozzed and nearly unrecognizable Johnny Depp) to help track Wallace down. At this point, any humor or suspense grinds to a halt.

Despite a flimsy story, Tusk is nearly as self-satisfied as many of Smith’s other missteps. In-jokes abound. A former walrus victim has the surname Gumtree, the name of the online classified site that spawned the idea for the film. Osment’s character Teddy recalls the actor’s plush toy companion in A.I. There’s a Big Lebowski joke. As Wallace endures body horror that is both visually unsettling and tame in its actual depiction of gore (he ends up looking like a gloried version of something out of Basket Case), Smith overreaches to touch upon themes of what humanity really means without any actual interest in exploring that topic.

Smith’s trademark overwriting does fit well when coming out of Parks’ mouth. Parks revels in the articulate walrus-obsessed serial killer role as much as Depp’s over-the-top French-Canadian investigator sputters into almost embarrassing farce. Long’s handling of Wallace’s initial douchebag persona feels forced in order for Smith to artificially generate ironic justice for the character, who makes six figures a year doing a podcast that mocks freaks. But once his ghastly transformation is complete, the whole endeavor grows unpleasant to no real end.

Tusk rarely scares or generates laughs. It doesn’t even obtain the gross-out shock value of The Human Centipede, a low bar to clear. Could a podcast joke stretched into a feature film mean Smith is short on ideas? We’ll have to wait until he releases Clerks III and an animated film that brings back the biblical themes of Dogma to find out. It may not quite dip down to his career nadir of Cop Out, but by taking an oddball premise and cutting the legs out from under it, Tusk simply bites.