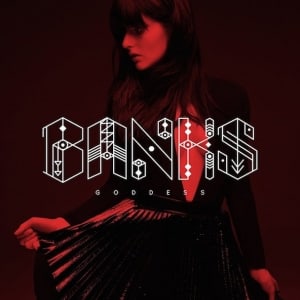 [xrr rating=3.5/5]Jillian Banks has a voice with great range and soul. Can “American Idol” contenders hit the same notes? Maybe, but they’re not writing her kind of dark, tear-stained pop songs. Banks’ lyrics aren’t going to win a Pulitzer, but they aren’t tripe either. She knows better than to take a hook and grab it by the jugular. Like the Haim sisters, her accessible R&B relies on emotion more than paint-by-numbers song craft.

“Alibi” launches the album with an organ pad that would sound as at home in a church as it would in a club. She accompanies her moody orchestration with the plea: “Please, give me something to / Convince me that I’m not a monster.” These songs are melodically accessible even though Banks seems inaccessible to us and even to herself. The title track is a new perspective on the female-empowerment breakup ballad. Banks doesn’t have the ego of Beyoncé (no one’s being told to bow down here) or the self-destructiveness of Rihanna’s collaboration with Eminem. Banks is preoccupied with the ways people tread on each other’s innate worth. Her lyrics focus on the inherent sacredness of femininity and, by extension, humanity itself.

On “Waiting Game,” she hones in on her own insecurities about the hazards of love. “I wish I was in love/But I don’t wanna cause any pain,” she sings. “And if I’m feeling like I’m even/We’ve got nothing to gain.” It’s good to see a pop artist who can admit their weaknesses. She may call herself a goddess, but she knows that in Greek mythology, goddesses are just as flawed as mortals. “You Should Know Where I’m Coming From” incorporates strings and bass drums to a crescendo that may well become a staple of the’ “Songs to Cry To” canon. Banks sounds like she’s looking inward for a light that none of us can see with our naked eyes. When she bares herself, she does it in the dark. She sounds vulnerable, and conveys an air of privacy even when she pushes her voice to its limit.

Writing moody pop music is its own battle. Banks is well on her way to the bestseller charts, but competition is stiff. With so many artists looking backward for inspiration, indie rock in 2014 is starting to sound a lot like it did in 1994, and the same can be said about pop. Her moaning, painful cries on “Brain” and her vocal runs on “This Is What It Feels Like” conjure up Aaliyah more than Aretha, and her keyboard arrangements wouldn’t sound out of place on a Fugees album.

It’s refreshing to see an artist as young as Banks pay homage to her forebears, and still have the confidence and talent to develop her own moody sonic palate. It may be too soon for her to identify herself as a goddess, but this record puts her on the road to the pantheon of sensitive pop artists.