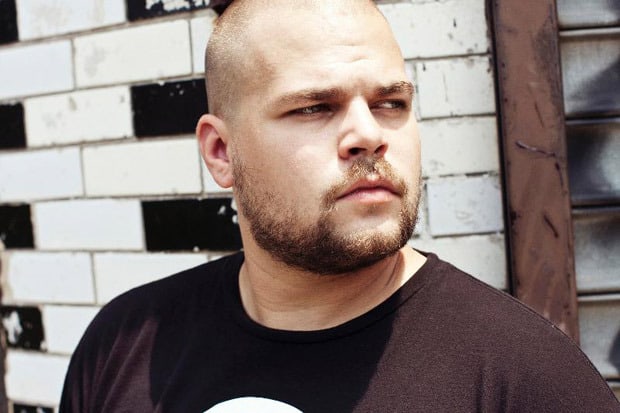 For fans of emotive electronica, the bill couldn’t have been more perfect. Produced in conjunction with The Downtown Festival, celebrating its first year in Cleveland, the late-night festivities pulled together the city’s own Marcus Alan Ward (formerly Freeze-Tag) with synthwave producer Seth Haley (bka Com Truise) over a shared love of astral concepts and visceral electronic vibes. For a late-night show, especially one that wasn’t free, Cleveland showed up in force; the crowd actually out-numbering that of the earlier Islands performance (a separate ticketed Downtown Festival event). With the rest city having gone quiet, the full house explored the serenity crafted by the pair of producers, Ward still working through the stresses of new live set-up while Haley guided the crew with supreme confidence in his textures.

With the recent release of his thematic Last Night I Grew Tentacles Ward is distancing himself further from the new crops of both PBR&B crooners and bedroom-laptop producers. In the recording studio it works, the 14-track release blending the instrumental enchantment of The Mars Volta with the club-readiness of UK-based genre-benders like SBTRKT, James Blake and How To Dress Well. However, the complexities of the full-length have not transitioned well into the live setting. Without the ability to sound check, the beginning of the set was mired by both microphone and drum pad issues. Major problems when his vocals are based around the subtle melodic shifts courtesy of himself and his live band, which was down to one member for this set. Those minor hiccups distracted Ward from truly engaging with his songs, thus reducing the impact they could have on the audience. With the expanded project still in its infancy, the road will only become easier to navigate, and allow Ward to truly mesmerize and inspire with his abilities as a producer, frontman, guitarist and visionary.

Surrounded with an array of gear, the Com Truise set is still live, it just avoids the issues that inevitably arrive with more on-stage members. Like the fictional robotic astronaut that serves as the protagonist in Com Truise’s production, Haley peered intently at the large control panel as he controlled the this (aural) ship, only looking up to return the cheers with a brimming smile. Most associated with his appreciation for nostalgic synth melodies and vibrant production palette, Haley went deep to keep the late-night audience captivated.

Normally fixated on brighter motifs, Friday night’s set saw a new appreciation for a concentrated low-end that added force to his often weight-less productions. These new builds got the building to “turn-up”, but in moderation. Haley wanted the audience’s attention for the entire journey, not just those peaks in bass hedonism. A mid-market, Cleveland would have been content had Haley just showed up and worked through his blog-house hits; instead, Haley read the room during the opening moments of the set and delivered an experience that many didn’t even know they were absolutely craving. By looking to the past for inspiration, Haley is pushing both chillwave and bass music to an unparalleled convergence.